A "water bear?" Come now, Kuro. Surely you would not do something as simple as show us a bear in the water, right? Or that shark-bear-octopus hybrid that keeps showing up online? 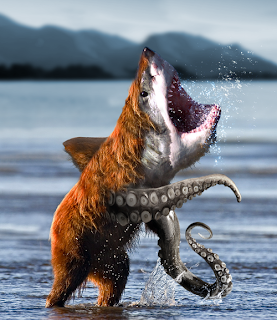 Far less terrifying is the actual creature called a water bear (phylum Tardigrada). It is so named not because it is cute and fuzzy, but because it moves slowly like a bear (thus "tardigrade"). (It also comes in plushie form.)

The only scary thing about water bears is that they are everywhere. I mean everywhere. From the Himalayas to the hottest deserts, you can and will find water bears. They can live up to a decade without water, and can even thrive after being exposed to the vacuum of outer space. That last one just put the cockroach to shame.

Nobody can hear you scream...except this thing.

In case you know absolutely nothing about outer space, there is nothing to support life. No water. No breathable air. Nothing. These water bears were sent into space for ten days, came back freeze-dried, and, after being rehydrated, started behaving normally. They even had perfectly healthy offspring.

This seeming invincibility comes from the water bear's ability to suspend its metabolism. All systems are put on hold when the water bear encounters extreme climate changes, be they pressure or temperature. The whole creature just stops.

Water bears have been exposed to intense conditions - the vacuum of space, intense radiation, you name it - and lived.  As long as a water bear has a minimal amount of water, it can survive. Creepy, isn't it?

Luckily, they're microscopic and feed mostly on algae. Really, if these things were any bigger, we would be trying to find ways to eradicate them.
Posted by KuroKarasu at 5:51 PM