Everybody thinks that mammals are smart. It has to do with not only humans being mammals, but also seeing intelligence by mammalian standards. Then, there are some people who ignore those standards and say that their cuddly little Foofiekins of a Pomeranian is smart because he learned how to sit; science says that pigs are smarter than dogs, guys. (Now vomit up your Christmas ham.)

And he gets good grades in school! Mummy just wuvs him!

Ahem. Sorry, but this is about spiders, not powderpuffs with legs.

Portia spiders would like to say hello to mammal-lovers everywhere. They (as a genus) are small jumping spiders that live everywhere except the New World, Europe, and extremely cold regions in general. They do tricks that put dogs to shame.

What? When was the last time your dog mimicked a trapped fly in order to catch a spider as prey?

Portia spiders have evolved psychopathy. They catch other spiders up to twice their size using a simple trick: They get in the spider's web and mimic the vibrations of a struggling fly (or mating partner). Since web-building spiders depend primarily on vibrations along the web instead of eyesight to find their food, they go ahead and check it out. Instead, the spider that made the web is the one that gets eaten. This is like somebody ringing your doorbell with a loaded gun in their free hand and is not even the full extent of Portia's cleverness. 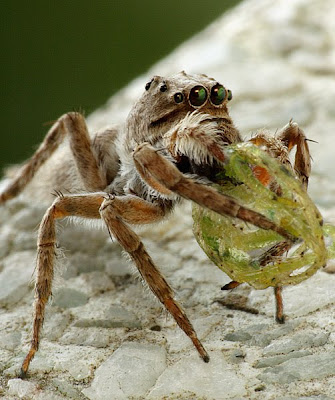 Before you say, "Oh, that's instinctive," only the douchebaggery is programmed. It does not matter if a Portia has never seen your friendly neighborhood web-spinners before; it will observe other spider species and, through trial and error, see what makes them tick. Portia spiders are fast learners; part of us wonders whether we are performing experiments on the Portia or the Portia is secretly experimenting on us, just waiting to see what kind of spider we are.

If Portia treatment sounds like something that you' wish on your enemies, Portia is with you there, too. Spitting spiders eat jumping spiders on a regular basis, but Portia have dealt with those in a terrifying manner as well. They attack spitting spiders from the rear or the front, depending on whether said spitting spider has eggs or not. I do not know how many humans would kill their enemies if they were pregnant, but spiders do not care. They fight head-on.

For the record, Portia's dickishness only shows that God is a mean-spirited being.

Besides eating other spiders, Portia also eat each other. If you thought black widows cannibalized too much, Portia can kill either before or after banging. They mate in mid-air, but the male does not get to enjoy that for long. Love bites.
Posted by KuroKarasu at 11:40 PM