Mammals, especially primates, are often considered "normal." There's nothing weird about chimpanzees, gorillas, orangutans, or monkeys in the public mind. Perhaps except for lemurs, primates are just like little people. There could never be anything totally, completely strange about them...right? 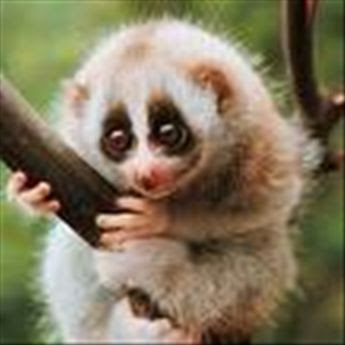 The slow loris is a small, tree-dwelling primate native to South-Southeast Asia. They can be found as far west as India. They are omnivorous and particularly fond of tree gum. Their closest relatives are lemurs, galagos, and other lorisids. Yes, we know they look like sloths; that confused scientists, too.

Slow lorises are about as closely related to humans as lemurs and are just as strange. Their arms, legs, and body are completely adapted for arboreal life.  Their hands have blood vessels that let them grip for very long periods of time - a necessity when one is an animal with "slow" in one's name. The digits are strange, too, with strangely-angled thumbs (180 degrees from the rest of the fingers) and perpendicular toes.

Oh, and they are slow. One would not suspect a small mammal to metabolize things as slowly as these lorises do. They even reproduce slowly. So, yeah, they're primates who think they are sloths.

That's not the weirdest part. The weirdest part is that these not-gremlins have a poisonous bite. They have a special gland in their arms that secretes a mild poison. Said toxin mixes with their saliva to create a deterrent to predators. Bet you didn't think one of the few poisonous mammals out there was a primate, did you?

All the poison in the world cannot protect the slow loris from exotic pet fanciers and traditional medicine hunters. Lore around the slow loris ranges from everybody having a slow loris as their golden compass daemon to its gall bladder being used as tattoo ink and other parts being used for Viagra. All of that is moot when the animal is so darn cute that people smuggle slow lorises despite all possible legislation against it. Said lorises are usually de-fanged; the loris above is only as submissive as is it because that is a loris's defensive posture. It's scared out of its mind. Both of these stresses, combined with deforestation and a VERY low birth rate, mean that we may not be able to make cute videos of slow lorises for much longer.
Posted by KuroKarasu at 11:58 PM