"They Actually Eat That:" Brains.

OK, I'm sorry, guys, but a certain awesome friend of mine came over. We had a great time at Lincoln Park Zoo except for the subpar organic fare. Bottom line, I barely had the spring left to do one entry, let alone two.

That means this one's gonna be really nasty, 'kay?

There are a lot of jokes about eating brains thanks to the relatively new zombie fad. Why brains? Well, presumably, since zombies have few brains of their own left, whatever parasite/virus drives them to bite people also requires their brains to further replicate themselves. Said it before and I'll say it again: This sounds like the work of a prion, that one nasty little Mad Cow-causing protein that photocopies its butt all over your gray matter.

So why the hell are people eating brains?!

But of course! When I say that people use every part of an animal, I do mean every part. Brains are sometimes tossed in with various other viscera into "offal," the catch-all term for "miscellaneous bits that we don't know what to do with." These bits and pieces often become cuisine, as with the sheep brain dish from Spain and the cow brain dish from Portugal. In Mexico, they eat pig brains in quesadillas. Better watch out in places that speak Spanish or Portuguese; every one of them seems to have some sort of brain dish. 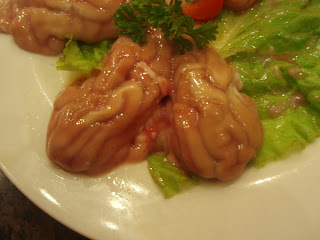 Like this, only in a fun little wrapper and ground up so you can't tell.

It gets worse: As in Indiana Jones, people did eat monkey brains at one point. This was known to happen more in China than in India. It was part of Chinese imperial cuisine in the Han Dynasty. As with almost every other weird food from China, this was thought to cure impotence. Oh, China, there is rarely a week when I cannot mention you on this space.

Other countries also supposedly eat monkey brains. The little belt of countries around China still eats monkeys, as more or less confirmed by this man's experience in Singapore. The practice of eating monkey has led to the overhunting of monkeys in Indonesia, and brains are included as 'edible' parts of said monkey.

Now THAT is what I call brain food.

Eating brains goes back a long way. Chimpanzees are not only known to eat other chimpanzees (including babies), but also eat the brains of monkeys for extra fat in their diets. Perhaps that explains the modern fascination with zombies: We are genetically programmed to eat brains.
Posted by KuroKarasu at 7:46 AM