"They Actually Eat That:" Shark.

Wait. What? What the hell are sharks doing here? Sharks are the undisputed, murdering psychopaths of the ocean. The appearance of a shark fin is usually a sign to get the eff outta the water. They can't be an aphrodisiac, what with concealed junk and all, so what the hell are they doing on this column?

Silly. Humans will put ANYTHING in their mouths. Sharks wind up in nets just like other fish do. Of course they get eaten.

Or, well, their fins get eaten. Shark fin soup is the main shark dish that gets environmentalists in a tizzy. It is, of course, found in China and several other places that carry on Chinese traditions (such as Thailand). Since the fin has no flavor of its own, the broth and other ingredients make the soup palatable.

The fin is said to have numerous health benefits, including helping the lungs and kidney function properly. It also has a unique texture somewhere between crunchy and chewy. The soup is served at banquets, weddings, and business meetings as a show of respect to guests. It is popular enough to make a dent of 70-90% in many shark populations. 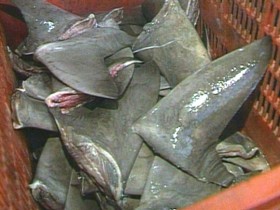 The kicker: Only the fins are used in the soup. The rest of the shark is tossed into the ocean, fully alive but unable to swim. Other little fishies probably say "serves you right!" and spit on the shark's rotting, finless corpse as they swim by. Considering this is coming from China - the place that eats all sorts of animal parts - this wastefulness is especially shocking. Plus, killing off apex predators isn't cool.

Shark meat is not nutritious. Cuisine or not, it contains very high levels of mercury, just like eagle meat would have contained tons of pesticides during the DDT days. The bigger the fish, the more mercury it has. Bioaccumulation. Learn about it.
Posted by KuroKarasu at 7:17 PM