What better way to kick off a week of Creature Features than with America's national bird? It's big, its bad, it's beautiful: It's the Bald Eagle (Haliaeetus leucocephalus). 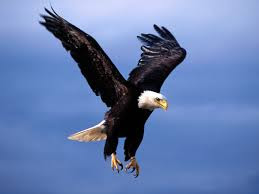 The Bald Eagle is native to the United States. All over. If you live in the U.S., you can see bald eagles somewhere in your state. They range all the way from Alaska to northern Mexico, placing the bulk of the population smack in the good ol' U.S. of A. It is most clearly distinguished by its striking white head (which was how the bald eagle got its name) and large size. Females are heavier and larger than males.

Bald Eagles are sea eagles, meaning that they are adapted to hunt fish. Naturally, they prefer habitats along coasts, lakes, rivers, and other bodies of water. Their favorite fishes are trout and salmon. Even evolution isn't foolproof- sometimes, a bald eagle will fall into the water and die of hypothermia in an attempt to catch a large fish. Bald Eagles are in constant competition with mammalian predators and the Golden Eagle, another, far more versatile eagle.

Oh, and man. Can't forget man. Bald Eagles have always been very sensitive to human presence. Recently, there was an event that really drove this sensitivity home.

Bald Eagles (and all other North American raptors) were hit hard by the pesticide DDT. DDT was originally invented to keep mosquitoes at bay. Trace amounts of this pesticide spiraled up through the food chain via an effect called biomagnification. Small animals had small amounts of DDT in them, meaning that bigger animals had even more DDT! The result was a sharp decrease in the viability of the eagles' eggs (weaker shells, sterility, take your pick).

By the 1950's, there were only 412 nesting pairs of Bald Eagles in the whole continental U.S.The bald eagle was put on the Endangered Species List in 1967. The eagle population rebounded after a ban on DDT in 1972, and it was finally removed from the Endangered Species List in 1995. The Bald Eagle is currently considered to not be under any threat, but there is still a safety net of legislation protecting it.

We almost made our national bird extinct in favor of wiping out mosquitoes. Nice work.

Now for the big question: Does the Bald Eagle really fit what America stands for? In that it is a powerful apex predator, maybe, but apex predators are favored as mascots and emblems in any case. The founders specifically chose an eagle to facilitate comparison with the Romans. Perhaps Benjamin Franklin was onto something when he suggested that we pick the turkey instead because it wasn't as much of a dick. What are your thoughts (even though I'm a day late on this)? Post your comments below!
Posted by KuroKarasu at 8:43 PM