Technically, no, viruses are not alive. They do not respire. They do not grow. They cannot self-replicate, instead injecting their DNA into a host cell and hijacking that cell's machinery. The bacteriophage above uses bacterial cells, not ours, so don't worry.

Bacteriophages (bacteria-eaters) are exactly what their name says, assuming you can understand Greek. They don't eat bacteria so much as inject their DNA into the capsule, then let the rest write itself. The bacteria soon explodes with more alien-looking phages. Since a phage's tail can only latch on to certain parts of the bacterium, certain phages can only attack certain bacteria. The most popular is the T4 phage, which eats the pesky E.coli bacterium.

Phages are important for their ability to destroy far worse bacteria just by reproducing themselves. These viruses have been quietly used for centuries to cure cholera, leprosy, dysentery, and anything else caused by a bacterium. They are the best defense we have against supergerms and E. coli infections. Never thought you'd side with a virus, did you? 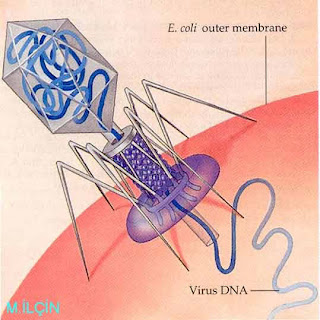 So, what about E. coli, anyways? Tune in tomorrow!
Posted by KuroKarasu at 12:10 AM