Life is interesting. Sometimes it even completely surprises you, unearthing things you never thought possible.  Then there are things that come right the eff out of nowhere and make you wonder what you're on. That's what this blog is all about: freeing your mind with stuff you never knew was there. 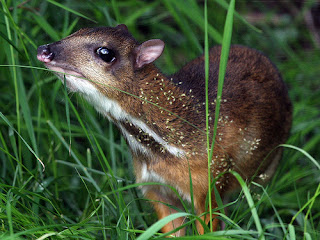 This, good followers, is a mouse-deer (Tragulidae). It is also called a "chevrotain," which sounds like Chevy's latest attempt to appeal solely to the female demographic. There are four extant genera, with more being discovered and named every so often. Locations include Asia, Africa, and India. The English name "chevrotain" is actually French meaning "little goat." An Indian word means "deer and a pig." That's how crazy this thing is. It can't even decide what animal it's most like.

And why should it? Chevrotain are very primitive creatures, having not changed in over 34 million years. Chevrotain are probably close to what the first ruminant ungulate looked like. Ruminants include deer, cattle, sheep, and most cloven-hoofed animals except swine. Whales were once ungulates, too, so this little guy is related to Flipper. Sure, it's distant, but the little chevrotain like water enough to make it a distinct possibility.

Keen readers will notice that pigs are not ruminants. The chevrotain, being a transitional beast, has some piglike traits. Like pigs, both sexes of chevrotain have elongated canine teeth and no horns. The herbivore parts are there, but not quite complete. Chevrotain will also scavenge meat alongside botanical diets. They're "deer and pigs" as in India. Somebody got it right.

I wonder how many creationists know about this thing? It looks like the fossil record may well fill itself if this keeps up. Evidence of life being amazing happens every day. Look around for it.