Newsflash: Polar Bears Not As Threatened As We Thought?

Since global warming was made a thing by Al Gore, the polar bear has been its spokesperson. We were, well, not thrilled to see the polar bear put on the endangered species list, but kind of glad it got there so as to raise awareness of global climate change.

But are they really that threatened? 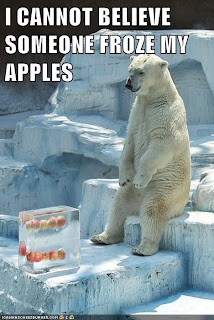 It sounds like a silly question. After all, the polar bear is an environmentalism mascot, just like pandas, tigers, and whales. They're one of those animals every zoo either has or tries to get because the species is going out of fashion in the natural world.

Then this tidbit came up on NPR. Recently, a writer went to the Arctic to write about polar bears. While there, he found an honest scientist who kindly showed him some polar bear droppings.The droppings revealed that the polar bear, which according to the interwebs has a diet consisting largely of seals, was also fond of goose meat and reindeer- Christmas dinner, if you will. (If we had more citations, we would give them.)

And yet, we cannot find this blurb on the internet. It made it to National Public Radio, but the surprisingly diverse diet of the polar bear has not yet crept onto the interwebs. Consider it crawling around, now. Treat it as a rumor if you like; it will get confirmed/debunked eventually.
The absence of this information on the internet baffles us, even when it shouldn't. Considering how many places say that the polar bear mainly eats seals, surely this would revolutionize something.

There are a few reasons why this hasn't gotten out, assuming its truth to begin with.  Facilities who have polar bears want to make them as big a draw as possible, which means making the bears sound rarer and more fragile than they actually are. Hell, zoos have a special "polar bear diet" that I'm pretty sure does not consist entirely of seal meat (Google it). There's something shady going on.

Don't get us wrong. The polar bear is still under legitimate threat from global warming. It's just not quite as bad as we thought.
Posted by KuroKarasu at 10:17 PM