Ah, sea cucumbers. We could do endless entries simply about how weird sea cucumbers in general are. These turds of the sea are related to starfish, can excrete their bowels to ward off predators, and are animate despite looking like Shamu's waste. Yet, stray outside of the typical sea cucumbers and there is a whole other level of bizarre. 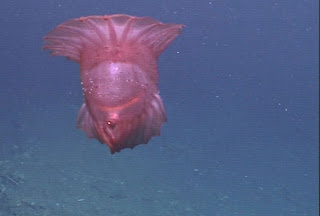 This is a swimming sea cucumber (Enypniastes). They are found in abyssal waters, presumably wherever the sea gets deep enough. It's harmless to humans, although exactly how many humans have seen one up close is a different matter. Not all sea cucumbers are created equal, that's for sure; a lot of the deep sea ones are quite strange.

Already, there is something unusual about these sea cucumbers: they swim. Both the front and back ends sport rings of webbing that let the sea cucumber move up and down in the sea. Plus, almost anything is better than being compared to a vegetable or animal dropping; pink, swimming blob is a nice step up.

There is much more to this sea cucumber than meets the eye, although it is pretty neat to look at. Like many deep-sea creatures, this holothurian can glow in the dark - or, to use the scientific term, bioluminesce. If a predator attacks this relatively helpless invertebrate, it sheds a layer of glowing skin onto the attacker while making its escape. Not only does the sea cucumber get away, its assailant is now marked with a glowing, neon band screaming "EAT ME." (Source: Field Museum, "Creatures of Light" exhibit. See it now.)

Alas, as with much abyssal life, we don't know much about these odd creatures. There are probably even more strange sea cucumbers waiting to come to light.  After all, who knew sea cucumbers favored bright pink?
Posted by KuroKarasu at 11:59 PM