They Actually Eat That: "Revenge of the Bacon."

Bacon love has gotten crazy. The greasy, probably delicious pork has taken America by storm in the last few years. It's fast, cheap, easy, and supposedly goes with anything. It's pretty much the transition point between meat and junk food. Oh boy, does that ever sound like the pinnacle of American cuisine.

And, once again, it stuns us how crazy people have gotten over bacon. For the most part, the pics will do the talking. 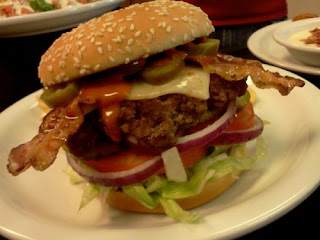 This massive peppered bacon burger is part of a promotion at Denny's called "Baconalia."The idea behind Baconalia is, as Denny's puts it, "give in to your bacon obsession." It is possible to have a three-course meal with every course including bacon. Seriously, it would not surprise anybody if bacon got the same treatment as pizza somewhere around the line. Bacon counts as meat! 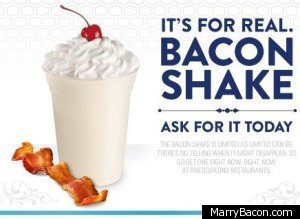 Speaking of restaurant chains cashing in on bacon, Jack-In-The-Box once had this: a bacon milkshake. It was offered for a very limited time and was a sort of secret menu item, costing one roughly 1000 calories as a large shake. It was also revealed to contain no real bacon. Fear does not describe the sensation running down our spines right now. No, that sensation is that of the sudden awareness that the FDA does not exist. If they did, why is this milkshake a thing? For that matter, why was MarryBacon.com a thing?

Finally, bacon zombies are apparently a thing. Yep. This has gone way too far. No wonder America's the fattest nation on the planet. Hey, how about giving kids in Africa bacon? No? Screw you, bacon fad.