Whooosh! Long night, that was. Members' Nights at the Field Museum are always epic affairs, though. The main attraction is the behind-the-scenes stuff that you don't get to see during normal museum hours. 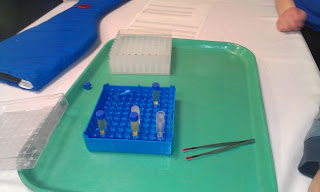 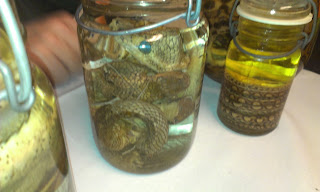 Snakes in jars. Lots of snakes in lots of jars. 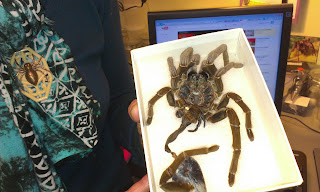 The department of entomology was pretty neat this time around, too.  Plenty of cool spiders, with some amazing blog fodder coming up. I did not know that all male spiders had bigger, "boxing glove" pedipalps when fully mature! The above photo is of a researcher's pet tarantula's molt...and an equally-cool necklace. 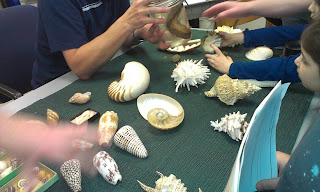 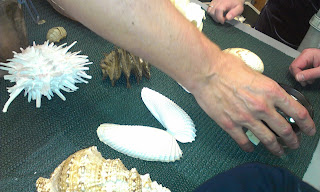 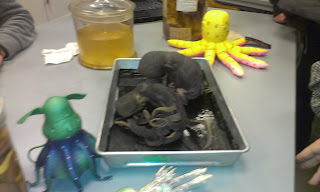 I got to feel an octopus at this display. Alas, it reeked of formaldehyde. Still cool. 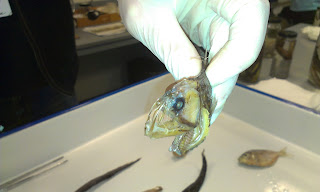 They really outdid themselves with the icthyology department this time, in part because "Creatures of Light" covers abyssal fish. How many people do you know who have touched a viperfish? Probably none unless you work there. 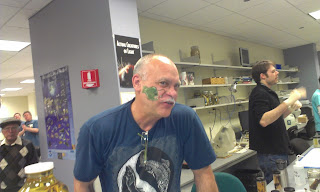 They even did face painting. This guy had an amazing anglerfish on his face- wonder how long it took? 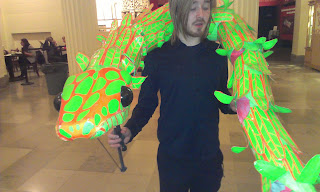 A Quetzalcoatl puppet! Not every day you see one of those. He was one of the many puppets roaming the main level this time around. Fun. 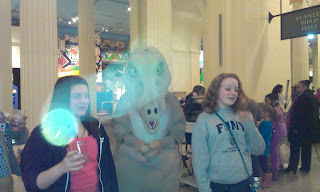 There was also someone dressed up in a T-Rex costume.  Funny, and definitely obligatory for a museum.

On a non-photographable note, one of the employees was playing Monster Hunter 3 Ultimate for the 3DS. I apologize if my character sucks right now, Leo. It'll be a lot better next year.