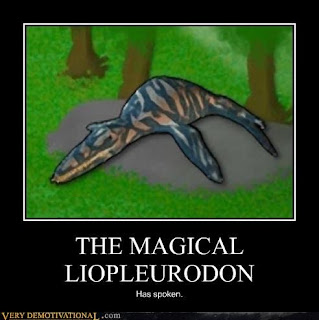 "It's a magical Liopleurodon!"

If you live on the internet, the above phrase should be strikingly familiar to you. It comes from the extremely odd Flash movie called Charlie the Unicorn. The first of the series features a Liopleurodon sprawled across a giant rock. So, what is a Liopleurodon, anyways? 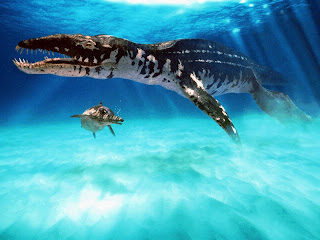 Liopleurodon is a genus of extinct, short-necked pleisiosaur (pliosaur) containing two species. These marine reptiles lived during the Jurassic Period, joining Stegosaurus as one of the few well-known archosaurs from that time frame. They have been found mostly in England and France, which you'd think would merit a more uppity-sounding name.

Liopleurodon was one of the big ones.  The biggest specimen of L.ferox was roughly 21 feet long. People trying to cash in on Liopleurodon will tell you otherwise, sometimes replacing "feet" with "meters" to create a sea monster of gargantuan proportions. There were bigger pliosaurs. For some reason, the misconception of a giant Liopleurodon has stuck. Pliosaurs, including Liopleurodon, had very powerful bites. Look at that huge jaw on a stocky neck - it's like a crocodile mixed with a pit bull. The exact opposite applies to plesiosaurs normally; Nessie, for example, has a tiny head on a long neck. One pliosaur was thought to be capable of biting through granite, but unfortunately, we have no means of testing.

Liopleurodon is one of paleontology's sweethearts. It's a giant carnivore, and has been treated like one in series such as Walking With Dinosaurs (which got its size grossly wrong). There's also a neat bit with a Lio versus a Megalodon- a giant, extinct shark. Oh, and when Liopleurodon is not being a killer, it shows magical unicorns the way to candy mountain. Y'know, even though it didn't say anything.
Posted by KuroKarasu at 11:44 PM