First off: I owe you all a theme week. I had one in mind, but a trip to the San Antonio Zoo made me second-guess. That place is awesome, and I took lots of pictures that will totally get their own entry come Thursday. Everywhere I go, I must check out the zoo. Always! 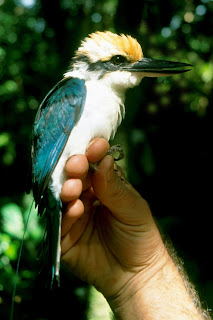 One of the things the San Antonio Zoo had was an awesome bird house. Among its inhabitants were Micronesian kingfisher (Todiramphus cinnamomina cinnamomina). They are largely piscivorous and live in forested habitats. As per the internet, there are three subspecies of Micronesian kingfisher, all of which are native to the Pacific Islands. According to the zoo, however,  they are extinct in the wild, just like the scimitar-horned oryx.

First off, this is a nice-looking kingfisher. All Micronesian kingfishers have some combination of deep orange and blue plumage. The subspecies have different ratios. Otherwise, they are all but indistinguishable from each other. Wait a tic- an extinct species having subspecies is a little strange, isn't it?

To be frank, the zoo was overstating the endangered nature of this kingfisher. What they really meant to say was that the population on Guam had been wiped out by brown tree snakes. (For future reference, the snakes were nobody's fault - any exotic pet legislation citing that case is a load of bullplop.) This is more like a subspecies going extinct than an entire species. The way the placard put it, it was as if the whole species had gone extinct in the wild. That is not the case. There are plenty of Micronesian kingfishers waiting to repopulate Guam, both in the wild and in captivity. The tree snakes need to leave regardless.

This entry blends oddly well with the polar bear misinformation discussed on Sunday. Although these kingfishers are pretty charismatic by themselves, their "extinct in the wild" status adds a sense of rarity. It's still pretty impressive that the zoo has Guam kingfishers, which are indeed an EW subspecies. The other two subspecies are treated as "least concern," although threats loom in the distance. Overstatement, or early warning? You decide.
Posted by KuroKarasu at 11:15 PM