Not many people like spiders. The awesome lady with the spider jewelry last night was more an exception to the rule than anything. They are, however, fascinating creatures that really deserve more entries on this blog. 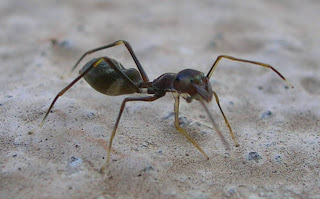 Look out, here comes the Spider-Ant! Actually, it's an ant-mimicking jumping spider (Myrmarachne formicaria), but close enough. It's native to Africa, with relatives in many places.

In all seriousness, though, there are a number of jumping spiders who have ants as alter-egos. They span at least two genera, and are native to most tropical parts of the world. A few live in temperate regions. Yes, they eat insects, like most other spiders. Despite awesome mimicry, this is not cannibalism. There are an amazing amount of these spiders. Cue mass-entry guilt.

For those of you who know nothing about arthropod anatomy, here's a little primer. Insects have three body segments and six legs. Spiders have two body segments and eight legs, plus two pedipalps. A number of tricks are used to pull off that visual trickery, including raising the forelegs like antennae and making the pedipalps look eerily close to an ant's head. It's a darn good job. 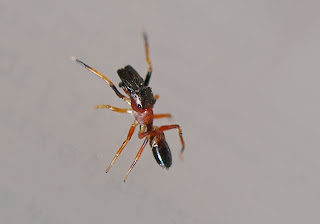 Why the spiders do this is something of a mystery. Always suspecting the worst of a venomous creature, scientists first thought that spider-ants were infiltrating anthills by going in undercover. This turned out not to be the case for many, but not all, ant-mimics. Unbeknownst to most humans, ants taste bad, and can also sting with formic acid. Not a bad thing to disguise oneself as.

Of course, this won't protect them from humans who hate ants, too...and there are quite a lot of those. You fooled nobody with A Bug's Life, Disney - ants are crafty little buggers who wind up in my bathroom every spring. Yeah, disguising yourself as an ant won't work well all the time.