That's right: After doing Bio-Art features twice in a row, both times on Monday, I decided to make this a thing. Mondays will now be Monster/Bio-Art Mondays, with every Monday featuring a new piece of modern pseudoscience or scientific art. This Monday will be Avatar. K? K.

If you do not know the story of Avatar, you have been living underneath a rock for the last few years. No offense, but very few facets of popular culture have been untouched by Avatar. I also say this because the story is like Dances with Wolves mixed with Ferngully and given LSD. You've probably seen the story before.

Long story short, Jake Sully, an ex-marine, joins a team of scientists on Pandora, a planet with all-new life forms. Sully and some other members of the team are assigned to the Avatar Project in which they mind-sync with genetically-engineered bodies of the planet's key sentient race, the Na'vi. He eventually gets to know the Na'vi so well that, after an epic battle with his old boss, he becomes a Na'vi.

Okay, where to start with one of the biggest pieces of pseudo-scientific art since Jurassic Park? How about the hyper-ecology that everybody seems to love?

Hollywood loves to make what I call 'hyper-ecologies.' There is no definition for this in Webster, but in short, it's an ecology that eats earth species for breakfast - literally. The killing in these settings is usually kicked into hyper-drive, meaning that even that world's ladybug is waiting for the right opportunity to murder you. "Everything that crawls, flies or squats in the mud wants to kill you and eat your eyes for jujubes." - the mark of a hyper-ecology.

The actual ecology of Pandora, however, is not on crack like it was in Fragment. Along with fierce carnivores like Toruk, the Banshees, and Thanator (BADASS name), we are exposed to a large amount of herbivores. These herbivores look like they could defend themselves - they aren't pansies, but they have evolved to have hooves, tough skin, or creative ways of concealing themselves, just like real herbivores. There are also small predators, like the doglike pack-hunters that attack in the night (which would promptly OWN any domestic dog and remind me of Inca Orchids).  It's meant to be alien, but is really only on par with Australia in ferocity and general strangeness.

Speaking of, despite being isolated like Pandora, Australia did have a lot of convergent evolution with the rest of the world. Pandora takes this to an extreme. Many of the designs were based off of sea life, such as the "Christmas Tree Plant." A lot of the life on Pandora is like earth life with extra limbs, bioluminescent spots (which serve little purpose- this place has day and night) and flashy colors. The Banshees and Toruk are kind of exceptions, but they're probably what would happen if fish eventually took to the air. Or so the textbook says. 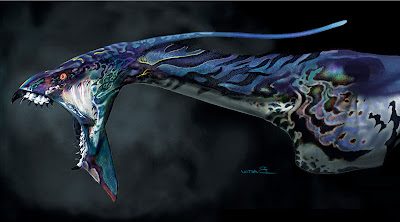 The jaws on these guys really speak to their evolutionary lineage.

The Na'vi really push the bar; nearly everything on Pandora has 6 limbs except for them (although we do see the Prolemuris with two limbs fusing). Na'vi are furry Mary Sue/Gary Stu wet dreams, able to control everything in their environment via energy networks. They are overanthropomorphized and played way too straight as the poor native tribe that needs salvation from the white man. It's also mildly annoying that every fictional hominid in every fictional ecosystem I've seen sports a primate-ish ancestor, making reptoids (theoretically descended from troodons) at least more creative than most.

My overall thoughts on Avatar coincide with those of Red Letter Media: "Well, I didn't hate it." It does not do story or characters well. What it does do well is create a plausible, if derivative, ecosystem. Instead of there being nothing but giant superpredators, there are plants, animals, and several more or less docile species. It feels like a lot of that world's potential is wasted in a movie - even with hours' worth of extra footage, Cameron cannot do his world justice on film.

When RLM said that Avatar felt like "Pandora: the Ride," I was inclined to agree. There were books and an extensive Wiki on the universe. It sounds like it would be a fun world to play around in, either in fanfiction or as a MMO. Most computers come with built-in webcams, now. Use some of that fancy face-mapping technology to make incredibly realistic Na'vi avatars and go. Luckily, James Cameron is already planning on making such a game - don't kill yourselves yet, OK?
Posted by KuroKarasu at 9:41 PM