Permit me to nerd out for more than a minute. Yes, Kuro is an anime fan, and yes, some anime qualifies as bio-art in the simple definition that it combines life sciences with art.

Such is the case with Shiki, a novel written by Fuyumi Ono and manga-fied by Ryuu Fujisaki. Semi-long story short, Sotoba, a rural town in Middle of Nowhere, Japan, suddenly gets an epidemic of summer colds caused by vampire bites. The local doctor soon figures out that the strange cases of anemia going around the village are not a 'natural' occurrence. Shit hits the fan and scatters in EVERY direction. That trope "Anyone Can Die?" We mean it here.

Hoo boy, are there a lot of ways to dissect Shiki (pun not intended). I've looked at it as a Japanese take on a normally Western creature; I've looked at it as an encounter between two sentient races (as expected, it does not end well); I've watched it several times just to take (horribly detailed) notes on this particular type of vampire; hell, there's even a way to look at it as a massive, supernatural analogy for the music industry. This will focus on the science, but no doubt some other things will slip through as well.

The scientific facets of Shiki hit the reader/viewer hard from day one. Although most vampire stories have an occult doctor (a staple of the genre since Carmilla - a lesbian vampire story which predates Dracula), Toshio Ozaki goes above and beyond by giving us extremely descriptive details of exactly what these vampires are doing. Two different types of anemia and the term "hematocrit" come up within the first two episodes. One of the vampires tries to excuse her nocturnal behavior by passing it off as a form of lupus. Daaang.


Just about the only thing dubious about the research that went into this series is Toshio's repeated diagnosis of "bug bites;" vampire bites look a loooot more like pit viper bites, and Japan's most common snake is the hemotoxic mamushi. No reason not to TRY the antivenin, which is supposedly so common that police boxes have it. Nobody tries to make a vaccine throughout the series, either. A few of the reactions were off, but the research was solid.

That was all just background for the only vampires I have ever seen work. Ever.

Shiki are caused by a parasite that looks and acts a lot like Plasmodium falciparum - the organism responsible for 90% of all fatal malaria cases. The main differences are the tweaked incubation period (4 in the living body and 4 in the corpse - still a total of 8 before it really takes over) and that P. shiki has flipped the mosquito the bird. Wow, mosquitoes, even malaria hates you now.

There are a number of reasons why something might evolve away from using a mosquito as a vector. Bats eat you, dragonflies eat you, and all it takes is one good bug net to keep you out. There is also some sort of weird internal clock that times things such that the Plasmodia all burst out of the red blood cells at the exact time of night the human body's fever is at its highest and pray that the scheduled mosquito has not been eaten by a bat. Otherwise, it cannot continue its life cycle properly. Screw that.

The (fictional) Plasmodium shiki has taken the mosquito out of the equation by using a human corpse as a vector instead. This would logically have started with a mind-numbed corpse (either resurrected by slowly rewiring circuitry or numbed a la datura) only capable of biting other humans as a means of furthering the parasite's reproductive cycle. Over time, the species would have been selected to keep the memories and personality of its host. Easy food is easy. 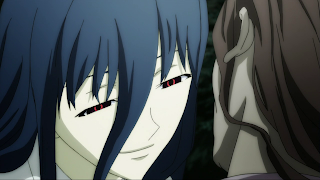 Almost everything strange about vampires can be explained by the behavior of a Plasmodium parasite. Plasmodia are blood-borne; the resulting organism has a modified, thinner integument that burns easily in sunlight; the weakness to stakes is, well...almost anything would die by being staked or beheaded. That internal timer was set to shut off as soon as the sun rises, then reactivate when the sun sets.

There are a number of things that are still a touch hard to explain. For example, no extant mammal has retractable injecting teeth. The parasite either recalls ancient genes (atavism- it happens) or constructs the fangs itself via differentiation. Also, we don't know how the parasite does this, but it has activated infrared vision in human corpses (which makes sense; mosquitoes and vampire bats both use infrared to detect warm-blooded prey). There are still a few fantastic elements, but they can be figured out well enough to make solid bio-art/hard fantasy.

As an anime series in particular, Shiki's pacing is horrible. Do not be fooled by the Shounen Jump label; the additions to the series that make it, ah, shounen-friendly are noticeable. There are some cultural things that the average person will miss, but are fun Easter eggs for those with eyes to see. I'd be lying if I said I didn't thoroughly enjoy Shiki. Swear my parasite nerdiness and Chizuru's rack are not the only reasons.

Now, if you all will excuse me, I have a tin hat to put on. Google is watching me sleep.

Posted by KuroKarasu at 4:44 PM