"The black Lava rocks on the beach are frequented by large (2-3 ft), disgusting clumsy Lizards. They are as black as the porous rocks over which they crawl & seek their prey from the Sea. I call them 'imps of darkness'. They assuredly well become the land they inhabit."


If this doesn't sound like something from the Dante, only more terrifying, we do not know what does. No, a religious guy from Texas did not write the above passage. That was Darwin. DARWIN. Mr. Evolution himself. Lamarcke, Darwin's predecessor, also treated reptiles as slimy, gruesome beasts. Even so, what reptile could possibly merit such a vile description?

The reptile Darwin was describing was the marine iguana (Amblyrhynchus cristatus), a large iguana native to all islands of the Galapagos. The largest specimen on record was a male 5.6 feet/1.7 meters in length. It feeds almost exclusively on marine algae. Like many creatures of the Galapagos, it is considered vulnerable. Contrary to Darwin's description, some marine iguanas are quite colorful.

The marine iguana is the only marine lizard in existence. By this, we mean that it is the only extant lizard to live and eat near or in the sea. It feeds on nothing but sea algae, can swim up to ten meters deep, and is capable of staying underwater for almost half an hour. It deals with the salt in the water via a special nasal gland that sneezes it out on land. The spilled salt makes the iguana's face look white, just like eating fast food inevitably leads to breakouts.


Big and impressive as these lizards are, they are not adapted to dealing with predators -let alone efficient mammalian carnivores. Cats and dogs are the biggest hazards to these slow-moving, herbivorous iguanas. You wanna ban an invasive species, government? Ban humans and their inevitable furballs.

So, does this giant marine lizard merit Darwin's ghastly description? Kinda.While this lazy algae eater may hardly sound monstrous to most of us, at least one movie monster has been inspired by the marine iguana: 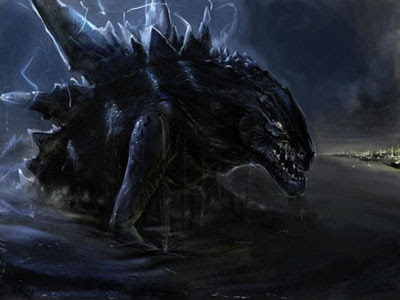