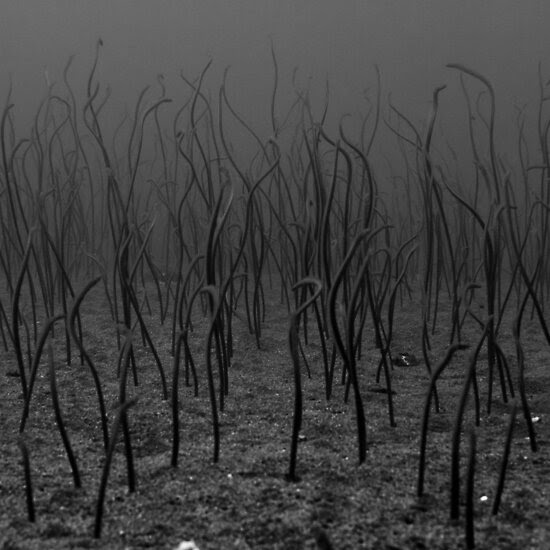 Woah. Wow. What the hell happened to the water, there? It's like the sea went into apocalypse mode, leaving only strange, weird worms in the place of colorful flora and fauna. There's no way that setting could be perfectly natural, right?

The creatures above are actually a type of eel. They are collectively called garden eels (genus Heteroconger)  and are members of the conger family. All garden eels are native to the warmer Pacific waters, especially the area around the Philippines. They are very shy carnivores that can vanish into their burrows in a flash. They're also as cute as an eel can feasibly get once you get over their general weirdness.

Colonies of garden eels can be seen along the Pacific floor. They hide most of their bodies in burrows. The eels have a hard back end which allows them to burrow backwards to begin with, and the mucous coatings on their bodies stabilize the burrows. Most of the time, one will only ever see 1/4th of the eel's body above the ground. This makes them the eel equivalent of whack-a-mole.

Some animals have naturally taken advantage of the garden eels' strange habits. For example, another type of eel called a snake eel has evolved to whip through the garden eels' burrows and attack them from beneath. In captive tanks, they are shy enough to be continuously bullied by other fish. Garden eels may be uncanny carnivores, but they are far from menacing.

For your own sake, do not attempt to procure these strange little eels as pets. They exist in the aquarium trade, but require such specific husbandry requirements that even experts have issues with them. The most obvious of these requirements is, of course, the extra substrate necessary to give them burrowing room. The Shedd seems to be handling them just fine, but that does not mean you should try it at home.
Posted by KuroKarasu at 11:33 PM