Dude. Duuuude. Nature be trippin', man. There are things with, like, all these crazy colors and stuff. You don't need LSD to get high off of nature. Duuuuude. 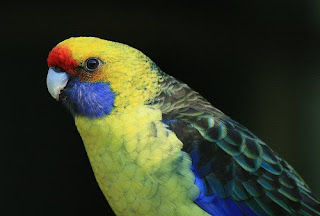 So, like, there are these parrots native to Australia. They're called, like, rosella parrots (genus Platycercus). You know, that place where everything's trying to kill you with teeth, claws, or wicked-ass poison? Even the bunnies? Yeah, that's where some of the world's gnarliest parrots come from, including the rosellas.

DUUUUUUDE! This rosella parrot is, like, TOTALLY tripping on acid! And whatever drugs they're on, both the males and females are doin' it. Both the dudes and the chicks look pretty much the same. They also have like, a super-simple courtship system based on head-bobbing and tail-wagging. And acid. Rockin'.

If you want your own acid parrot, you can like, totally get one as a pet. The ones above look like baby phoenixes and should TOTALLY be on the cover of a rock n' roll album. Rosellas are easy to breed in captivity, but are, like, known for being aggressive. Y'know, like almost everything else in Australia.