3-D animation and robotics are getting more advanced every day. As technology advances, the line between human and inhuman will become blurred. Nerds foretell the robot apocalypse for a reason. Just look at some of the robots Japan has:

Enter the uncanny valley. As robots and animation become more advanced, you will be seeing this word more and more. It's worth knowing what it's all about. 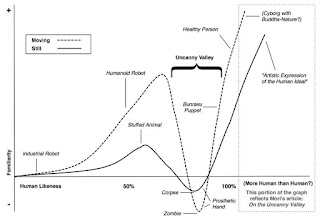 First of all, just what is this valley that is so uncanny? The word "uncanny valley" comes from a strange dip on a graph. The graph basically says that as robots get more and more human, the viewers of those robots should come to sympathize with them - except they don't. There's a certain point on the graph where viewers start to feel revulsion towards the robot. That point - that sudden dip into "that freaks me out" - is the uncanny valley. The term was coined by Japanese robotic expert Masahiro Mori, who had definitely experienced its effects firsthand.

The uncanny valley is totally natural. The current theory about the uncanny valley is that it stems from a human instinct to avoid mating with the sick. These slightly-abnormal elements tip us off that the "person" we are looking at may not be all right. It's just that: uncanny.

The uncanny valley does not just apply to robots. Next time you see a zombie flick and feel like someone in the main cast is going to go nomming brains, you know what sense is tipping you off. It's that "this person is not acting normal" feeling and is perfectly natural. Pay attention: If it isn't a robot apocalypse, it'll be a zombie apocalypse, so keep your Uncanny Goggles (TM)  on.

Although not a proven scientific idea and very hard to define, the uncanny valley is taken very seriously by filmmakers and, in particular, animators. Back before Toy Story, Pixar made a short called Tin Toy. YouTube it if you like. The baby in the film is so realistic that it's creepy (if babies don't creep you out already). The Polar Express has also been accused of hitting the valley. Nonetheless, the powers that be will strive on to make the robots as human as possible. Except...y'know...thinging.