Well!  Today is the first official day of the Chinese Year of the Snake! What better way to celebrate than do kick things off with a Chinese snake, eh? 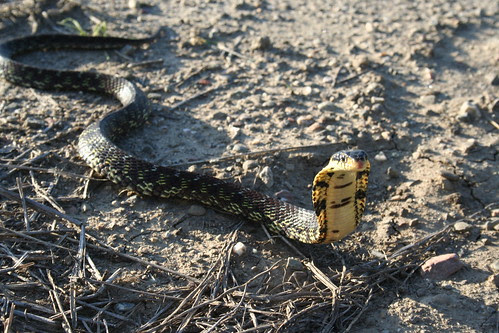 (This photograph belongs to its rightful owner. They are very lucky to have such a gorgeous, rare snake!)

This will probably be the first look at a Chinese False Cobra (Pseudoxenodon bambusicola) for many of you. It's native to the cool mountain forests of China. The species is rear-fanged venomous, so handle with care. In the wild, it feeds almost exclusively on frogs. This habit carries over into captivity.

The reasoning behind it being a false cobra is simple: like a cobra, this snake can flatten out a few ribs and raise its head. As Tom Crutchfield, one of the few people who works with these snakes, says, they're "the best monocled cobra mimics. Ever."

Other than that, this snake is hard to find information on. This is largely because it's all but unheard of in the pet trade. You really have to know someone who's seen one, then done the homework, go to China and pray to Nuwa (China's local snake-bodied deity) that you can snap a pic, or randomly find it in a reptile magazine. Some Indian reptile guides also cover this species. Other than basic field information, very little is known.

These are not beginner's snakes. For starters, yes, they are venomous. There are only a select few people who will breed them, which means either spending a lot of money or getting parasitized wild imports. Finally, they only eat frogs, and nobody has found a way around it. That means no buying mousecicles for Chinese false cobras. Even pros have trouble keeping this shy, fairly docile snake alive. Please try something like a kingsnake or ball python before getting into cobras of any kind!

Just between you and me, I should have done a blue or more black snake for this entry. Happy Year of the Snake- don't worry, snakes guard your money like dragons do their treasure!
Posted by KuroKarasu at 10:56 PM