Pterosaur Week: Will the Real Pterodactyl Please Stand Up?

As you all may know, I am a huge fan of pterosaurs. Always have been, hopefully always will be. Why not devote the last week of February to them, then? After all, there's one thing that I was bound to cover here, sooner or later...

Insofar as my knowledge of pterosaurs goes, no pterosaur that we know about has both a bony crest and a long tail. Rhamphorhynchus was once suspected of having a very small crest, but this was later proven false.What remains is a strange hodgepodge of a pterosaur called a "pterodactyl" that looks a lot more like someone just felt like making a "dragon" (or "wyvern") out of old pterosaur parts. This can be done by combining Quetzalcoatlus, Rhamphorhynchus, and Pteranodon in any way you like. Pterodactylus was something almost entirely different from this nonexistent monstrosity. 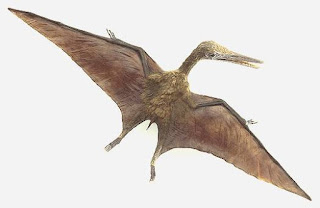 Pterodactylus was the first pterosaur ever discovered (1784). It was around during the Late Jurassic, so no, it never got to hang with T-Rex. It likely ate fish and other small animals, and could walk on all fours if need be. Most specimens have been found in Germany.

As you've probably noticed after dissecting the common mishmashed pterosaur, a million different pterosaurs get lumped under the label "pterodactyl." One could make an argument that most pterosaurs fall into the subfamily Pteradactyloidea, but that relationship is farther back than that of foxes and wolves. Technically, "pterodactyl" means "wing-finger," so any pterosaur with a wing-finger (hint: they all have it) could theoretically be called a "pterodactyl." It's technically correct, but you'd have to be even nitpickier than I usually am. It's still not genus Pterodactylus, whatever it is. There are indeed a lot of things in that genus.

Pterodactylus is a waste taxon. Whenever a random pterosaur comes up that doesn't belong to anything else, it goes there. Anything that doesn't belong anywhere else and is not distinctive enough to make scientists go "woah, we really have something different" gets called a pterodactyl. It is literally the most generic pterosaur in existence. It is also the most misrepresented.

Pterodactyls - real Pterodactyli, not the hodgepodge mess- distinguish themselves by not really having any distinguishing features. In general, they are small-sized pterosaurs with no bells or whistles. What many people think of as a "pterodactyl" is likely a Pteranodon or some bastardization thereof. Real pterodactyls were tiny by comparison. We're talking roughly a yard's worth of wingspan. It was tiny.

The image most people have of "pterodactyl" properly belongs to Pteranodon, the large pterosaur with a crest and amazing wingspan. The real Pterodactylus is not in the least bit impressive aside from being the first pterosaur discovered. Don't worry, though; plenty of other "pterodactyls" exist to compensate for the lack of presence. It is still uncanny that the genus that the "pterodactyl" originated from gets so very little presence.


Whew. Rant decades in the making, finally done. This week is going to be a blast.
Posted by KuroKarasu at 8:19 PM