You are not misreading that header. It is not Pokemon Week again. There really is something with the simple name of "Irritator." Let us show you.

This is a dinosaur named Irritator challengeri. It was found in Brazil in 1996. Like other spinosaurids, it was either carnivorous or piscivorous - there's still a fair amount of debate on that regarding spinosaurids in general. It lived in the early Cretaceous, which means it did not quite coincide with Tyrannosaurus and a great amount of the most popular dinosaurs.

Before you mention that this sounds like Latin done by a moron who was trying to sound smart, no, it was made by scientists after racking their brains trying to figure out what exactly this thing was. It was first classified as a raptor for some very questionable reasons, including that the snout had been lengthened just to make the specimen more impressive. It might even be the same thing as Angaturama, another spinosaurid found in the same time and place. Irritating indeed.


Despite being named by scientists, Irritator was not discovered by scientists. They named it, but they were not the ones to dig the skull up. The skull - the only part we have - was found through the illegal fossil trade. As mentioned above, it was doctored to look more impressive, making scientists ball up paper in frustration. The good news? It's still the most complete spinosaurid skull today. 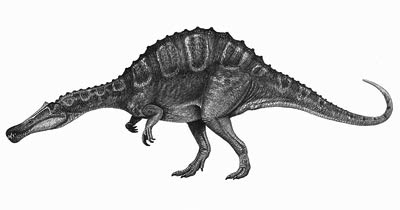 Now for what you really came to see: Irritator in the flesh. Contrary to its mildly-annoying name, Irritator was a beast. Imagine a crocodile walking on two legs. Now imagine that it weighs 2-3 tons and is 8 meters long from head to tip of the tail. Imagine that it had a neat-looking fin and could all but breathe underwater with its nostrils located towards the top and back of the jaw. That was Irritator, AKA "Jaws meets Jurassic Park."

Irritator has not had much love in popular culture. To its credit, however, the "Dinosaurs Alive!" attraction at King's Island starts with Irritator. It's hard to imagine a Vivosaur more trollicious than Dimorph in Fossil Fighters, but if Irritator ever made the cut, I'm sure he would live up to his name. Don't expect to see him as a Jurassic Park threat, though...at least, not with a name like that.
Posted by KuroKarasu at 11:43 PM