People love reading and writing about artificial life. Predating Frankenstein was the idea of a homunculus - an artificial lifeform made by alchemists. Frankenstein made the concept even more popular. Since then, man-made creatures have been speculated time and time again. They will likely remain a fixture in art and literature for years to come. 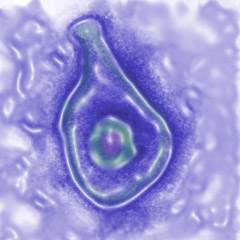 In 2010, one Craig Venter announced the first artificial genome ever created. Its name is Mycoplasma laboratorium. Technically, only the genome was 100% synthetic, forming one circular chromosome. The genome has since been transplanted into another cell of the same genus. It is the first man-made life form ever.

That's not entirely correct, however. M. laboratorium is made from reconstructed DNA- that is, it still uses nature's blueprints. It can be more properly said that M. laboratorium is the most synthetic organism to date. It can supposedly reproduce just like a regular, parasitic bacterium, containing all the essential coding for life.

M. laboratorium's basis is a bacterium called M.genitalium. As the name would suggest, it resides in the genital and respiratory tracts of primates, including humans. It has the smallest known genome that can still be called a cell. That, and it must be very easy to acquire, being inside humans and all.

They have also done something which I'm not sure to praise or shun: they have watermarked this bacterium.This sounds similar to Eduardo Kac's messages involving DNA. The actual encoding system remains undisclosed, but the base text is pretty much English. No doubt someone will crack it eventually.

Even with this organism being mostly synthetic, the uproar surrounding the project has been substantial. The Vatican has not condemned this new creature, saying that it is not really new life. Expect more artificial life in the future; the same team that made M.laboratorium has been hired by Exxon Mobil to design algae for diesel fuel. Now if only more creative minds focused on solving the world's problems instead of making video games and movies.
Posted by KuroKarasu at 11:41 PM