It's almost March. That means Spring will be coming soon. This also means that several other animals, such as monarch butterflies, will soon be flourishing in our lawns. 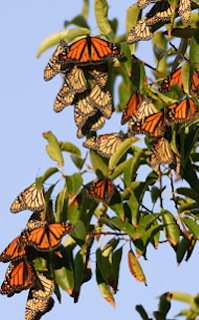 For those of you who know nothing about monarch butterflies aside from what they look like, you are missing out. Monarchs migrate from the cooler parts of North America down to Mexico as soon as winter hits. They give birth there, then die. The new monarchs that result then fly their way back up north when things get warmer. They are the only insects that migrate 2,500 miles a year. One of the classic butterflies happens to be one of the most impressive in several regards.

One mechanism has been found to play a tole in this intense migration: monarch butterflies have an uncanny genetic instinct to migrate to the exact same spot every year. The monarchs mate, then die, leaving their offspring to navigate the exact same path. That's 2,500 miles, all wrapped into genes like the world's finest GPS. Beat that, Google Maps.

Now, scientists have found what makes these butterflies tick. Here's the deal:

"Until now, researchers didn’t know what triggered the trek north. They suspected environmental factors such as temperature or changing day length could cue the monarchs. To find out, Reppert’s team studied southward-migrating monarchs captured in the eastern United States. The scientists housed one group of migrants in an incubator for 24 days and turned down the temperature to 4° Celsius during dark “night” periods and 11° C during light “day” periods — the average temperatures in the wintertime butterfly roosts. The team exposed a second group of butterflies to the same temperatures while also simulating the subtle increase in daylight that monarchs see over the winter while in Mexico.

Then the researchers took the two groups outside and tethered them one by one inside a flight simulator — a white plastic barrel that gauges flight bearings. In both experimental groups, the lab-wintered butterflies flew north. In fact, Reppert says, “the data were identical.”
Also, southern-migrating monarchs that had been captured in Texas and kept in the lab under fall conditions — with no pulse of nightly cold temperature — continued to head south when hooked up to the flight simulator.

“It’s astounding,” says ecologist Karen Oberhauser of the University of Minnesota, who supplied captured butterflies to Reppert’s team. She’s convinced that just 24 days of cold temperature is enough to switch butterflies’ flight direction from south to north. But she’s also curious about the effects of day length alone.

Reppert says the direction trigger might be modified by changes in day length, but “clearly coldness is the main factor.” Next, his team hopes to figure out exactly how the monarchs sense temperature."

This is neat stuff.A lot of people don't really think about seasonal cycles in wild animals. We're kinda used to animals, including humans, mating all the time. In reality, animal mating cycles are fine-tuned such that mommy only gives birth when there is an abundance of food available. Humans and domestic animals usually don't have to worry about that.

More importantly, however, this revelation on the impact of temperature may mean that the monarch is in trouble. If global climate change messes with their migration patterns, the species could die out. Enjoy the magnificent butterflies while we have them; if these findings are any indication, we might not have them around much longer.