"They Actually Eat That:" Escolar.

If you ever pick up a sushi menu, you will see some strange stuff. There are things like sea urchin and eel alongside common salmon, tuna, and shrimp. Then there are simply odd uses for regular fish, like taking their eggs. 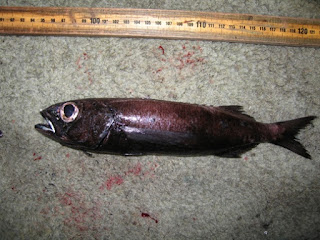 Escolar (Lepidocybium flavobrunneum) is found in deep, tropical waters around the world. It is related to oilfish. It is often mislabeled, leading to caveat emptor around anything labelled "butterfish." In fact, it can be mislabelled as almost any other fish on the planet. It is possibly the most dangerous fish on the market.  Oh my.

Escolar has a serious consequences if eaten in excess. The technical term for it is keriorrhea. In English, that means you get nasty bowel movements and urinate yellow oil. Escolar do not metabolize oil as well as some, so we get stuck excreting it instead. For the record, the safe amount is 6 ounces.

The good news: it can taste really good. As a fattier fish, it tastes very rich. It has been described as having a laxative effect. Despite the side-effects, escolar remains popular due to the taste and other effects.  In other words, it's the illegal drug of the fish trade.

The irony? Escolar is banned in Japan and Italy. The Japanese government considers escolar toxic, and these are the people who eat fugu.If a roll has escolar on it, it sure as hell isn't traditional. It's tricky; escolar is often mislabelled as white tuna, Atlantic cod, or other fishy things. It is usually either illegal or issued a fact sheet...except in the United States. Even Hong Kong has limits on it, and they make low-quality stuff on a regular basis. Enjoy illegal sushi! 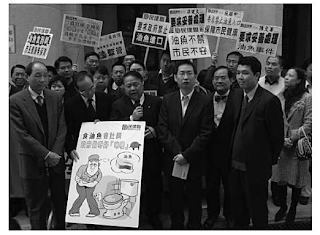 Email ThisBlogThis!Share to TwitterShare to FacebookShare to Pinterest
Labels: actinopterygii, fish, oceans, They Actually Eat That