Ever think about how huge an honor it must be to name a dinosaur? The result is then recorded for generations to come- at least, until somebody finds that it belongs to an existing species and needs to be merged. Oh well. 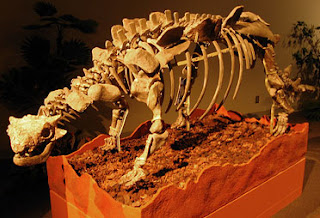 Michael Crichton received the honor of being named after a dinosaur in 2002 when an ankylosaur was dug up in China. The ankylosaur was named Crichtonsaurus bohlini; a second species in the genus was found in 2007. Crichtonsaurus was around during the Late Cretaceous- the last period before the KT event, which wiped out the vast majority of dinos. On the plus side, at least it got to hang with T-Rex, Triceratops, and a bunch of other popular dinos we all know and love.

Crichtonsaurus was technically a nodosaur, not an ankylosaur. The general idea is still the same: an armored, herbivorous mass of scale and plates. Many ankylosaurs also had a club on their tails which could be used like a mace. They're neat creatures, and this blog needs more of them. It's still far from what one would expect if they heard that the author of Jurassic Park got his own dinosaur.

Really, though? It doesn't matter if this dinosaur was a clunky, herbivorous tank instead of a massive predator like T-Rex. If anyone deserved a dinosaur named after them, it was the author of Jurassic Park. Without him, the world would be a very different place.
Posted by KuroKarasu at 10:39 PM