The idea of "you can slap any word onto 'fish' and it's probably a thing" makes for a rather funny game. Triggerfish are subtle; there is a trigger there, but it's not obvious unless you're looking for it. Surgeonfish? Yeah, I don't get it, either, but I wouldn't trust it with open-heart operations either way. Squirrelfish do not look like squirrels - period. Then there are cowfish...

Cowfish are members of the boxfish family, which are closely related to pufferfish. Yes, like fugu, these fish are poisonous. They are native to tropical waters; many of them can be found in the Indo-Pacific. They eat crustaceans, like fish and crabs, as well as plants like algae. The longhorn cowfish ( Lactoria cornuta) is the most popular.

Cowfish are best known for, well, looking like cows. They have boxy bodies and long horns coming out of their heads. Like cows, they are also tanks; the scales on this fish's body are fused into a tough shell. They are slow swimmers and grunt when captured. We'll cut the fish some slack because a mooing fish would be just crazy, and they look enough like cows without sounding like pigs. Moo. 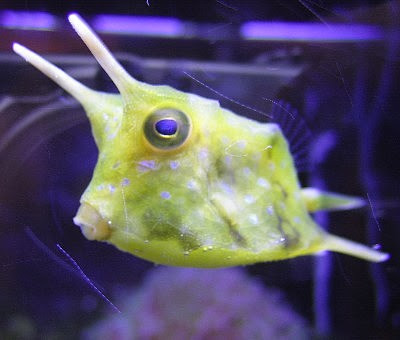 Cowfish have another defense aside from looking like cows: if irritated, they excrete a nasty poison. It is called ostracitoxin and cannot be broken down as it is not a protein. It is hell-bent on destroying other fish, and is hemolytic to boot. It kills sharks. Even other boxfish are not immune to one PO'd cow. The meat is also poisonous. No cowfish steaks for you!

Good gods, cowfish are popular in captivity. They are available at Petco if the online search results are any indication.  This does not mean they are beginner fish - it means that you need to read directions. Cowfish are generally peaceful, easy-going fish that take their time and do not like stress from having a lot of tankmates.  Failing to acclimate them properly may result in poisoning your whole tank. Popular, but still not for beginners, so if you're a newbie, don't get a cow, man.
Posted by KuroKarasu at 9:22 PM