"They Actually Eat That:" Inarizushi.

A lot of people are not adventurous eaters. Just today, I met with someone who had a bad experience with sushi prior to our meeting. He was a bit hesitant to try eel and shied away from sea urchin sushi (which only made me shy due to how pricey it was - see my entry on sea urchin for why). It's not the first time I've met someone shy like that.

Actually, as far as "weird" food goes, sushi is rather tame. This depends on what's in it- for example, fugu is not for the uninitiated. Most "standard" sushi rolls are just fine for people curious. Adventurous eaters will be please by the array of artistic sushi that has been created, even outside of Japan.  For now, let's look at something simple: 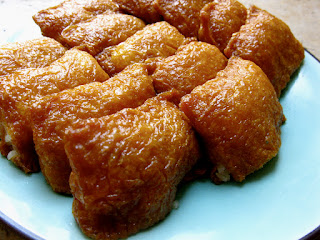 This is inari, inali, or inarizushi. Many a sushi place will have it. It is likely the safest sushi for those who do not believe anything with the "sushi" label could possibly be good.

Inarizushi is so named for one, or both, of two reasons. One, Japanese foxes (kitsune) are said to be highly fond of fried tofu. Two, inari are usually cut into triangles like fox ears. Three, Inari is the Japanese god of rice and closely associated with benevolent foxes, who are said to be his messengers. What? Whaddya mean, that was three reasons?

Inari rolls are made of rice wrapped in tofu skin. That's all an inari roll is: rice and tofu. The skin is fried in a sweet sauce, but really, tofu tastes like whatever it's been dipped in. It's a packet of tofu skin with rice stuffed into it. It's nothing nasty like raw fish. If you can handle Chinese food, you can handle inari. It's as safe as sushi gets.

So, please don't be too intimidated by my weird food columns. A lot of it tastes just fine, but isn't something that "normal" American people try. Hell, Americans have done things with sushi that the Japanese would likely find disgusting, including putting cream cheese in anything. Try some of it; you might like it.

Now, back to your regularly-scheduled pterosaurs.

Email ThisBlogThis!Share to TwitterShare to FacebookShare to Pinterest
Labels: japan, japanese mythology, They Actually Eat That