After reading all of my blog posts, you are probably thinking that there is no creature that I will not obsessively love for a day. Just like everyone else, however, I have one creature that I simply do not like. That creature is the brown recluse spider (Loxosceles reclusa).

No, I am not an arachnophobe. I have nothing against spiders. My usual instinct is to take whatever spider I find and move it out of harm's way. I just do not like this particular spider, even though it lives in my neighborhood.

Brown recluse spiders are native to the midwestern U.S. down to the Gulf of Mexico. It is identified primarily by the fiddle-shaped mark on its back. It is also a fairly large spider, so it is easy to see this little deathbringer coming. Their favorite hiding places are in the basements and drawers of suburban households. 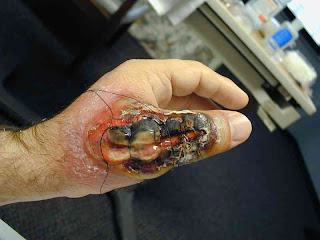 One bite from a brown recluse causes necrosis. Some people feel nothing at first, but the area will become inflamed within a few hours. The pain slowly gets worse until the flesh and other soft tissues are rotted through. If that was not bad enough, the wound is also open to infection. Ouch.

Of course, it's the human's fault if the spider bites. The name says it all: These are shy spiders. Humans just made several perfect environments for these spiders to live in. Many spider bites are also misdiagnosed; Staphylococcus aureus can cause similar symptoms if it infects the bite. As a reminder, those are the same bacteria that have become resistant to antibiotics. Even if the spider is not initially responsible for necrosis, its bite is nasty.

It's even sadder when a llama gets bitten.

The recluse's bite is just about the only cool thing about it. There are no markings or similar that say, "hey, I'm a dangerous spider that may melt your skin off." I am not about to systematically eradicate these guys, but if one crosses my path, expect it to be hit with a newspaper.