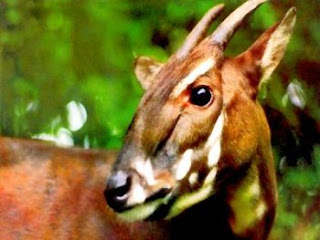 In the looks department, the saola (Pseudoryx nghetinhensis) is nothing special. It's a fairly bland antelope. Sure, it has some interesting features - short horns, huge scent glands, and an odd skull that make scientists think it a primitive bovid - but not weird enough to make the average Joe go "WOW!" The people in Laos and Vietnam, however, go so far as to consider it a unicorn because of one simple feature: It is that rare.

The last time we heard about something like this was the okapi, an animal so bizarre that it may as well be mythical. There are good records of the okapi in local lore; the Egyptians thought it was strange, and they were the ones obsessed with the afterlife. The okapi was also rare enough to elude scientists until the 1900's. That's rare, but the saola has beaten its record. 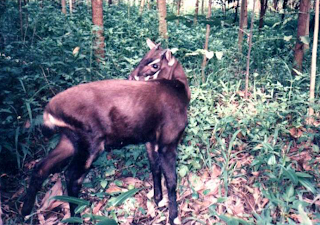 The saola is just plain rare. In 15 years of searching, science has discovered zero saolas in the wild. Its mythical status is well-warranted, seeing as it has been spotted by villagers while avoiding the eye of science for so long. It was not even officially acknowledged as an animal until 1992. Either we fail as humans, or the saola really knows how to hide.

There have been very few instances of a saola ever being in captivity. In August 2010, people in Laos found a wild saola and tried to raise it in captivity, but, like any unicorn, it promptly died. No unicorn would ever tolerate being gawked at and prodded with weird poles. They would commit suicide before that.

Tomorrow: OK, enough mammals. Time for a bird.
Posted by KuroKarasu at 11:01 PM