Raise your hand if you know what "lotus boob" is. Keep it up if that simple, Photoshopped image of a lotus seed pod over a lady's teats gives you shivers. If you do not know what the hell I am talking about, there was a lotus pod + boob image combined with a gross story about how parasites laid eggs in a woman's rack a while back. It was quickly found to be fake, but still scarring.

Silly internet. Nature has something much creepier than that.

That's not from a horror flick. It's from an exotic pet convention. People raise Surinam toads (Pipa pipa) at least in part for the strange-as-all-get-out way that the females give birth. Seriously, those guys up there are acting like it's Christmas. They aren't freaked at all; after all, mammalian birth is at least as gross.

Surinam toads are native to South America (hence the name). Even without eggs in their backs, they look strange. They are to frogs and toads what the matamata is to other turtles.

The main reason people are interested in Surinam toads is their weird reproductive habits. While making out (called "amplexus" for frogs), the male and female rise from the floor and begin to loop around while locked. As they turn, the female releases eggs; because of how they loop, the eggs wind up on her back, like this: 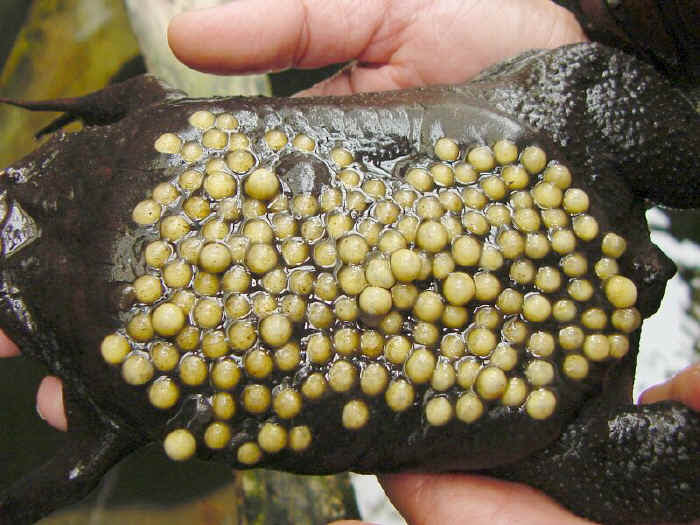 Now, hold your Przelawski horses: Don't frogs usually hatch into tadpoles? The ones in the video emerged as...well, not fully-grown frogs, but frogs far more froglike than tadpoles. Those eggs are not just on the mother's back; they're embedded into her skin. So, too, are her babies for most of their lives. When they are fully-developed, they swim through their mother's hollowed skin and are independent from then on. 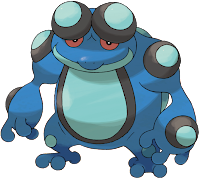 Hey, be glad that Nintendo did not go all-out with this one. The giant frog from Gen V (dub name not yet confirmed) is covered with giant blue eg- I mean boom box speakers. Well, that's one way to remove how insane this amphibian is; besides having eggs in its back, the male uses clicks to call his mate underwater. The eggs are still freakier.

Tomorrow: What is a Przelawski's horse, anyway?
Posted by KuroKarasu at 8:07 PM