"I'd come back as a butterfly."

"Because nobody ever suspects the butterfly. Mwahahaha!" - Bart Simpson.

Indeed, who would suspect a butterfly of doing anything sinister? Moths are slightly more suspicious and annoying, but still nothing to worry about unless you have a precious wool sweater. All of Lepidoptera seems pretty innocent; even the moth with a skull on its back is harmless. They are hardly frightening creatures.

Oh, wait. Except that moth. 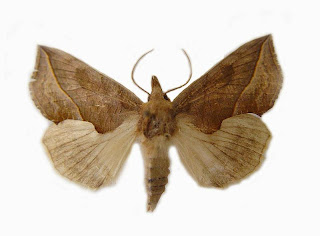 Moths of the genus Calyptra have a sinister secret hiding beneath that demure, brown coloration: Their proboscises have evolved to become sharp enough to pierce mammalian flesh. While pulsating their bifurcated mouth parts into a mammal's (that means your) body, they slowly suck up some vital fluid. (By the way, the case is opposite with these moths and mosquitoes; the males bite.) Expect the bite to hurt for 2-3 hours after the moth has left. They are not disease vectors like mosquitoes, so you will definitely live to say that you got bitten by a vampire moth. 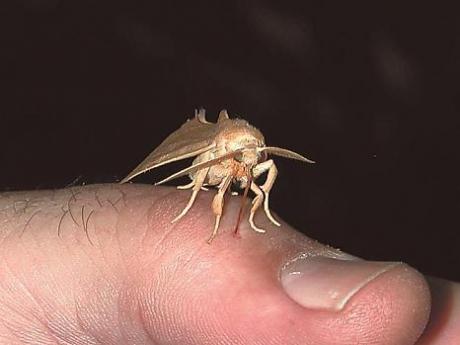 Nobody is sure exactly how these moths became dusty, fluttering nosferatu, but the current theory is that related moths first evolved those strange mouth parts to suck fruits juice out of fruit. Sucking human blood is just an extension of that talent. Umm, wow, science; does this mean that we should all start fearing vegans?

Yes. No good can come of an image like this.

Oh, and by the way, Calyptra moths are native to southeast Asia, Japan, China, the Urals, and southern Europe...or they were. They have now spread as far as Finland; a few have also been spotted in Sweden, a little further West. If this keeps up, they will get to America and have terrible literature written about them within the next few decades.

At least they don't sparkle.


Tomorrow: The parts of the pig that you never thought would have a use DO have a use; also, see how awesome pigs used to be!
Posted by KuroKarasu at 11:12 PM