Flower up there is not a fancy rat. She is a Gambian Pouched Rat, also known as a Gambian Giant Rat (Cricetomys gambianus). Despite being only tangentially related to rats (they're both rodents - that's all!), they resemble giant regular rats at first glance. By "giant," we mean approximately a meter from head to tail. 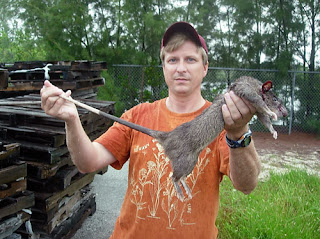 What really sets these African rodents apart from other rats, however, is their cheeks; like hamsters and chipmunks, pouched rats have cheek pouches. Regular rats do not. The pouched rats are actually from a uniquely African branch of mousy rodents, and can make great exotic pets.

Yeeeaaah...that is where the problems come in.

If you have followed this blog long enough, you know the stance on exotic pets: As long as you can handle them, cool. As with giant pythons, however, a few animal conservation groups got cheesed by the giant rats. That's not fair; they're being trained to sniff out land mines in Africa.

To be fair, these rats have one thing against them that the giant pythons did not: Monkeypox. As with the Black Plague, giant pouched rats were blamed for an outbreak of monkeypox in the U.S. in 2008. They have also invaded Florida - geez, guys, can't you just ban the exotic pet trade there? Yes, yes, Floridians love their giant snakes and rats as much as anyone else, but all of these invasions are in one area. Have some sense.