OK, that's two disturbing creatures in a row. Time for a cute! 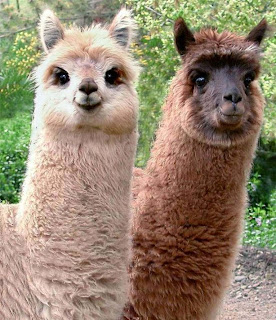 Yes, yes, we know: Llamas (Llama glama) are not particularly weird. They are domesticated relatives of the camel and have been used for riding, wool, and meat since before the Conquistadors decided to take over South America. Like camels, they spit regularly and have jaws that look very strange to humans. 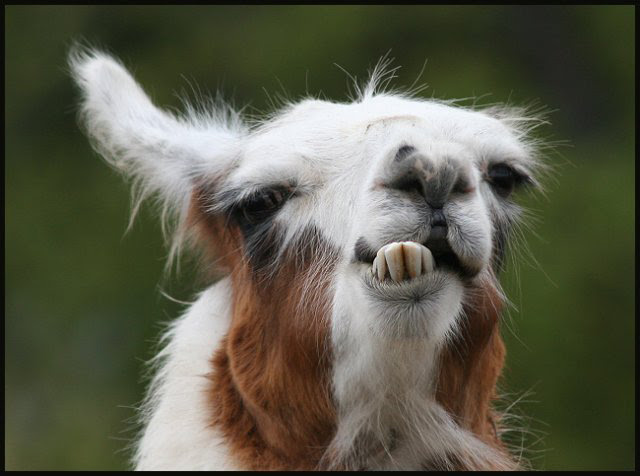 They are also bigger than frogs. Not that it matters.

Llamas also have a strange mating cycle. Unlike most large animals, they mate lying down. They have no estrus cycle and are induced incubators, meaning that they can and will have babies whenever they please. That every shot is right on target for a male llama is either awesome or terrifying depending on how much of a feminist you are; it is, however, very good for llama breeders and other people who love baby llamas (called "crias").

And awww, why not?

Llamas are very social, but bottle-feeding and other socializing should be done sparingly. Too much cuddling means that humans will be considered part of the herd (and thus spat upon). Otherwise, they are cute, friendly, curious creatures that make awesome guards for livestock. Yes, really.

Llamas are familiar creatures to anyone who has been to a good petting zoo.  The internet has gone llama-wild, too. What is just so funny about them that deviantART, Disney, and even Monty Python cannot keep their mitts away?

Just...look at them. Llamas resemble camels that have been crossbred with sheep. Camels are already strange-looking artiodactyls. Seeing a fuzzy camel with banana-shaped ears and a poofy tail akin to that of a Pomeranian dog is just silly. Llamas do not just look funny - they look ridiculous. No wonder they have taken over the internet!

Someone needs to make a calendar of llamas. Like puppies and kittens, they brighten every room that they are in.

Tomorrow: Penguins in the Andes?! Wow, we're on a South America roll.

Posted by KuroKarasu at 2:33 PM