What? The hell is a horse doing on this blog? We thought this was supposed to be weird, and horses aren't weird! A horse is a horse, of course, of course...or is it? 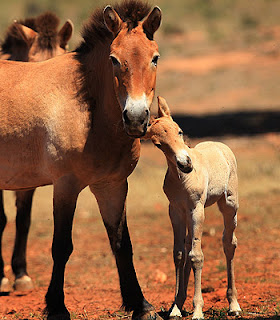 Ladies and gents, the Przewalski's horse (Equus ferus przewalskii) is the last remaining ancestor of the domestic horse and the only extant wild horse. It lives on the Mongolian steppes and in a Chernobyl radiation field in Russia. Another species, the tarpan, is said to be even closer than Przewalski's horse to the domesticated horse, but it's extinct; people have tried to bring back the tarpan via backbreeding, but this was about as successful as breeding back to aurochs. Talk about beating a dead horse.

To clarify, North American mustangs and Australia Brumbies are not technically wild horses. They are feral horses - that is, domesticated horse populations that escaped and bred. Przewalski's horse is the only known extant wild horse. Another would have been the tarpan, but the last individual of that species died in 1909.

Many times, when a species has become truly domesticated, there is a sudden dip in the population of its wild counterpart(s). The ancient relative of the modern cow, the aurochs, is currently extinct; wolves are either treated as OMG SPESHUL creatures by fans on the internet or hunted by crazy politicians that look like the Baroness from G.I. Joe; nobody really knows where the ferret or chicken came from. Goldfish are the exception rather than the rule; as in Pokemon, carp spawn very well regardless of their domestic midget cousins. Tarpans and Przewalski's horse are both either extinct or highly endangered. 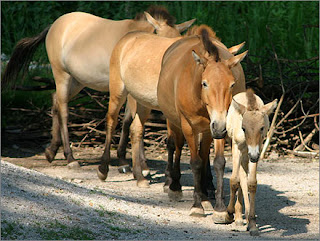 How endangered is it? Due to various factors, such as German occupation during World War II, its population was reduced from "all over Mongolia and China" to "just a few sparse locations and zoos." It was considered extinct in the wild for 30 years. The Asian wild horses around today are from captive-bred projects; see, keeping strange animals isn't all bad!


Tomorrow: Speaking of keeping strange animals...there's a chance that I have a strange bacteria-virus. Strange, but awesome!
Posted by KuroKarasu at 8:12 PM