Wow. The title of today's entry sounds like it should be on a Rammstein album. If I told you that this bird fed primarily on the bones (not the meat - the bones) of other animals, it would probably sound like some gothic wet dream (or Greek mythology...but more on that later). It is very real, and just as hardcore as it sounds. 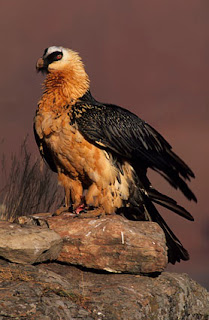 The Lammergeier (AKA "bearded vulture" or Gypaetus barbatus), surprise, surprise, has a decent range in Europe. It also lives in Asia and Africa. Its closest (and only) living relative is the Egyptian vulture, who will get an entry for its very own one day. Both members of this particular order of raptors are sufficiently unique to warrant their own entries, so enough about taxonomy. The main distinguishing trait these two birds share is a strange, elliptical tail visible when the bird is in-flight.

Lammergeiers, like many vultures, circle above dead prey before eating them. They live primarily off of carcasses, but will also eat live tortoises. In both cases, it has a rather bizarre way of getting to the sweet, stem cell-breeding bone marrow that comprises 90% of the bird's diet. Besides swallowing the bones whole, that is.

Both the Egyptian vulture and the bearded vulture like getting into tough prey; the Egyptian vulture uses rocks to crack open hard ostrich eggshells, an impressive instance of avian tool use, and the Lammergeier, when it encounters bones too large to swallow, flies up and drops the bones from above to crack them. It will also do this with live tortoises. Smart bird; compare crows using electric trains to crack open hard-shelled nuts and shellfish. 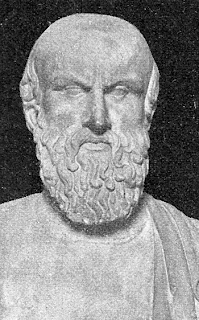 The Lammergeier's habit of dropping tortoises from the sky may have caused the death of Aeschylus, a Greek playwright. Aeschylus was a tragedian; among his most notable works are the Oresteia (a trilogy containing the Agamemnon, The Libation Bearers, and The Eumenides), The Persians, and Seven Against Thebes. His death is notorious; although it is usually said that an eagle dropped the infamous tortoise upon his head, the Lammergeier does this on a regular basis. There just so happened to be a human in the way at the time. Either that, or the Lammergeier preferred comedies.