Oh, crap. Another cute thing. What are you hiding? You're about to start a week of something horrific, aren't you?

Yes. Yes we are. No, we are not going to tell you what it is until we get there. For now, enjoy the penguins! 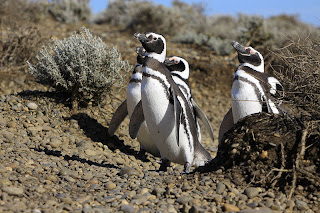 Magellanic penguins are native to the Strait of Magellan, an area around the coast of Chile and Argentina. Yes, penguins live in places besides Antarctica and Australia; the Magellanic Penguin is part of a group of penguins that lives in more temperate regions than the icy fields seen in Happy Feet and Coca-Cola commercials. Other members of its genus live towards the southern tip of Africa and on the Galapagos. Hey, that penguin dressed in island attire finally makes sense!

The Magellanic penguin is among one of the penguin species called "Jackass penguins." All four members of the genus Sphensicus are renowned for being very noisy birds for their size. They make a number of calls and can burp just as loudly as a human. A male Magellanic can find the exact same female that he mated with the previous year just by her voice. Screw the swan; these birds should be the posterbirds for monogamy. When a guy's wife shrieking at him is an attraction, you know things are good.


(There are a bunch of other cute things in this video, too!)

Magellenic penguins have just as epic a life as the ever-photogenic Emperor penguins. Like Emperors, they have to make a yearly journey to the coastlines of Chile and Argentina to find their nests. Some even go as far as the Andes to make their nests in relatively undisturbed places; others nest on the Falkland Islands or in private, unprotected areas. Head to Punta Tombo, Chile, at any time from April to September to see the largest colony of penguins in South America; if you're lucky, you might see a penguin chick or two.

As with the Emperor penguins, the parents take turns watching over and feeding their young. They hunt fish, krill, cuttlefish, squid, sardines and crustaceans. Eating that much fresh seafood would kill a human; the penguins have evolved a special gland to deal with the salt that they swallow along with their food. 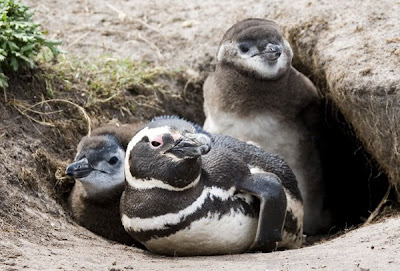 Lately, the Magellanic penguins have had to swim 25 extra miles (40 extra kilometers) out to feed their chicks and themselves. Oil spills and overfishing have reduced their food supply enough that CITES considers them a threatened species. Most other penguin species have similar problems. It is suspected that 12 out of the 17 extant penguin species are under threat. Up yours, BP; you're probably killing penguins as we speak.

Tomorrow: Luckily for you all, the real horror week starts Monday. Tomorrow's thing might still scare some people; how many of you will be scared off by a disco light jellyfish?
Posted by KuroKarasu at 10:20 AM