"They Actually Eat That:" SPAM.

Let the clip speak for itself. Watch it, then come back.

This Monty Python sketch alone fueled Spam's amazingly prominent place in pop culture. Notice how the inclusion of Spam in every menu item interfered with the overall appeal of the food; that is how the technical term "spam" came about. You have Monty Python to thank for your spam filter. If it was called the "annoying e-mail filter," it would not have caught on nearly as well. The food is so talked-about that Weird Al even has a song about Spam.

The question is...what is it?

The tab is there to open the can...the can is there to hold in the Spam. Goggles on, everyone!

Spam was invented in 1937 by Hormel ham. It contains "spiced meat and ham" - of pigs, obviously. It should be spelled with all capital letters as per trademark laws. Other backronyms include "Special Product of Austin, Minnesota," "Something Posing As Meat," and "Spare Parts Animal Meat."

Silly nature aside, Spam consists of pig meat preserved with water, potato starch, salt, sodium nitrite, and, of course, the can. The gelatinous glaze on Spam is made from aspic, a sort of gelatin made from various meat sources. Aspic is, in itself, pretty gross; please, somebody tell us how this is supposed to be appetizing:

This is not Spam. This is the stuff that preserves Spam.

Spam is often confused with mystery meat, even though it's pretty obvious that everything came from a pig. It comes in several flavors and tastes "kind of like ham." Its status as a heavily-preserved canned food means that it was both popular in the military and is generally thought of as a "poor man's food" by people in the continental U.S. Just about the only people on the mainland who really get a kick out of Spam are the manufacturers in Austin, Minnesota and a yearly, parody Spam festival in Austin, Texas. It's the Texans' job to make Spam appetizing. Porky Pig help us all. 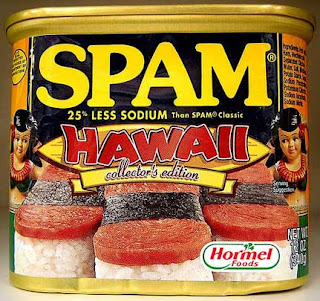 Despite the preservatives and its "who knows what's in that can?" nature, Spam has slightly fewer rabid fans than Lady Gaga. Korea, China, Okinawa (not technically Japan), Hawaii, the Philippines, and Guam all love Spam.The average person on Guam consumes 16 tins of Spam each year, and this is likely not counting the Spam in every McDonald's and Burger King on Guam. As if fast food could not be any worse for you.

As for Korea, China, and Okinawa...tip of the iceberg. They have done far weirder things with far weirder meats. We're going to let them slide on this one just because dog just so happens to be on the menu in some of those places, and Japan would eat the flesh of Dagon if they could wrap it in rice. Spam looks sane by comparison.


Next week: Whaddya mean, "I haven't covered calamari yet?" It's actually pretty good!

[Note: Midterms in everything coming up means Kuro something-something. Be glad I got this entry through.]
Posted by KuroKarasu at 8:29 PM