Happy belated Mother's Day, everyone! I hope you had a great time hanging out with your mothers. I know that sounds weird to say. As today's art piece shows, not everybody is so lucky.

Hello again, Damien Hirst. Fancy seeing you on this column with yet another formaldehyde piece. Mother and Child, Divided features a fully-immersed cow and calf separated by a number of barriers - including one gruesome twist.  This time, quite a lot is in the name.


Mother and Child, Divided is a fitting title in more ways than one. Not only are the cow and calf lamenting being separated postmortem, the displays themselves are bisected. The full setup contains a total of four tanks, each containing half of a cow or calf. Both mother and child are bisected. They are set up so that museum-goers can walk between the halves and see what the cows really look like inside.  How the organs do not randomly float around in the formaldehyde, I have no idea. The cows also have to be replaced from time to time. 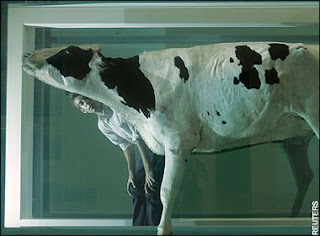 This is one piece that, despite previous questioning of Hirst's work, is definitely art in my mind. It is a very real, but often unacknowledged fact that cows are frequently separated from their young on factory farms. The only thing that could have made this sadder would have been to have the mother and child facing each other. Clearly, some thought went behind this formaldehyde-laden work.

Or maybe Hirst just wanted to mess with cow corpses for some other reason. Anyways, happy belated Mother's Day!