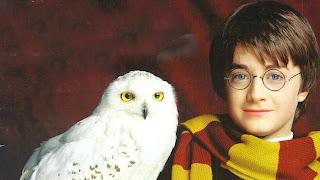 It is a proven fact that people will buy pets based on what they see in the movies. It is slightly less provable that Harry Potter fans are insane as a rule - they have not done anything on par with the near-felonies that the Twilight fanbase is notorious for. At least, that was what I thought until this rather unpleasant piece of news hit the internet:

"Pam Toothill, of the Owlcentre in Corwen, North Wales, said: “Before the films were out I had six owls, now it’s 100. It’s all down to ­Harry Potter.

“People saw ­Harry’s owl in the movies and thought how cute and cuddly they looked. Now they are bored and fed-up with all the work involved looking after an owl.

“They are quite costly to look after. Ideally you need a 20ft aviary, and that costs about £900.

“I know it’s not JK Rowling’s fault, but people didn’t think enough about buying an owl before getting one.

“Owls need enough space to be able to flap their wings five times before landing back on a perch, or they get a chest ­infection.

“But we had one lady who was keeping two owls in her bedside cabinet in her ­bedroom.

“And there was a chap with a ­European Eagle Owl, which has a 5ft wingspan, in his one-­bedroom flat. It’s insane.”

It is perfectly legal to keep an owl and no licence is needed. But anyone caught releasing a captive owl faces six months in jail or a £5,000 fine.

Thirty unwanted barn owls are among the 170 creatures being cared for at the Sanctuary Wildlife Care Centre at Ulgham, near Morpeth, Northumberland.

Owner Kim Olson said: “When people saw Harry Potter loads of them wanted an owl. They’ve kept them in their shed or garage for a bit and now they’ve got bored and they hand them in to us.

“It’s illegal to release an owl into the wild because they would take over from the native wild owls, but obviously a lot of people have ­ignored that law.”

Harry Potter author JK Rowling has pleaded with fans not to follow their hero and keep an owl as a pet.

“If anybody has been influenced by my books to think an owl would be happiest shut in a small cage and kept in a house, I would like to take this opportunity to say as forcefully as I can, ‘you are wrong’,” she has said.

“If your ­owl-mania seeks concrete ­expression, why not sponsor an owl at a bird ­sanctuary where you can visit and know that you have secured him or her a happy, healthy life.”

The Harry Potter owl craze echoes that of the Teenage Mutant Ninja Turtle film in the early 1990s, when thousands of ­unwanted pet terrapins were dumped in Britain’s rivers, canals and lakes. "

I honestly did not think people could be this stupid. I can understand impulse-buying a Dalmation after seeing 101 Dalmations, or a clownfish after watching Finding Nemo. Hell, I can understand buying a Burmese python more than what these people did. Owls aren't exactly common pets, nor were they a standard impulse buy like the occasional puppy, fish, or even python until Harry Potter came along. One would think that most people would be aware that owls have a specific diet and require a lot more space than a large parrot. This gives exotic pet owners and Potterheads alike a bad name.

Seriously, guys? J.K. Rowling was not writing a guide for owl husbandry when she wrote the books. The author has spoken against keeping owls like Harry Potter does. If you can't listen to the author's own wishes, what will you listen to?
Posted by KuroKarasu at 9:24 PM