And now for something completely the same: A duck with four legs. 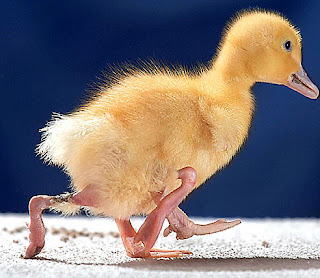 Wait a second. Yesterday's entry was on hokey taxidermy; this duck has gotta be a hoax, right?

Nope. Stumpy the duck is a very real, farm-raised duck that just so happened to be born with four feet instead of two. He was hatched at Warrawee Duck Farm in Hampshire, Britain in February of 2007. Four legs on ducklings is not an unheard of condition, but what's amazing is that, unlike other malformed ducklings, Stumpy actually lived to adulthood.

As soon as Stumpy was hatched, scientists were interested in him. Stumpy's owner sent a tissue sample to a professor at the University of Chicago. They hope to use Stumpy's weird as hell genetics to cure genetic mutations in humans. We'd kinda like to know exactly which mutations they have in mind for this. It would let us know if they have eugenics and/or super-soldiers in mind. 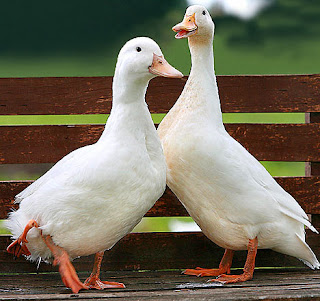 Stumpy got his official name when he became a full-grown drake. The first leg got caught in a fence and had to be taken off, leaving only a stump; the second fell off naturally soon after. This is one of those freaks of nature that sorted itself out. We're sure that the Creationists are very pleased...or are they?

Stumpy is currently living as a normal duck would (unless he has been made into pate at this point). He has a girlfriend, Alice, and will hopefully yield many little ducklings. Will they be ugly ducklings like their daddy? Only time will tell.