As the Monty Python sketch above will tell you, paleontologists can get crazy when it comes to piecing together dead animals. The most notable case is Anomalocaris, in which several of its parts were confused for being parts of different organisms. Juvenile dinosaurs frequently lead to new species due to subtleties in the jaw and spine as well as size.

This is one time I really have to wonder: Are you sure this is right, science? 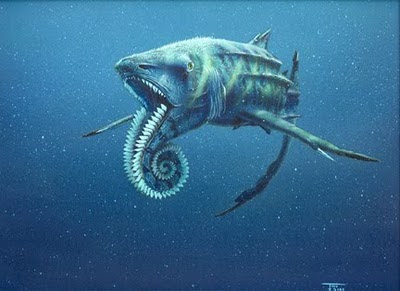 Helicoprion was a strange-looking shark that swam the pre-dinosaur seas (290 m.y.a.). It lived between the Late Carboniferous and Triassic - in land life terms, right after the cool synapsids died and right before the dinosaurs got started. It may have been anywhere from 10-15 feet long.

It also had a jaw that would make most modern horror monsters run screaming in sheer WTF. That jaw could presumably coil and uncoil, lashing rows of sharp teeth at anything it pleased. We aren't exactly sure where it was located, but it was definitely in the lower jaw. Do not let this uncertainty be any consolation- it's the difference between being lashed at by a giant toad or being licked by one of the Xenomorph's inner mouths, neither of which would be any more pleasant if sharp teeth were added. 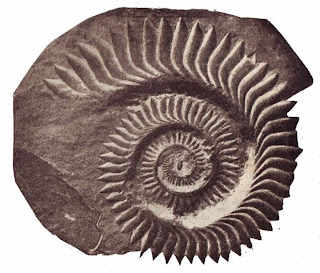 Nobody really knows what Helicoprion used this weird jaw for. Our best guess is that it was used to pierce ammonites, squidlike molluscs with shells like snails, right in the shell's air chambers. It also could have used that coil to lash out at schools of fish. I will even go out on a limb and suggest 'mating display' if this thing was on the outside, even though sharks don't have visual mating displays today. Regardless of where it was placed, the coil had rows upon rows of sharp teeth, so whatever got in there was put through a meat grinder.

To make this even more disturbing, Helicoprion had relatives. That is how we know science might be right with this one: we have more complete shark skeletons with jaws like that. The whole ocean was filled with sharks that had jaws like buzzsaws. By comparison, our sharks are cute and cuddly.

So, the next time one of those killer shark movies comes out, bear the following in mind: Just like you, that shark has teeth inside its mouth as opposed to stuck on a death coil. Science, if you were trying to create a nightmare machine, good work.If you were trying to revive one of Dagon's minions...good luck with that.