"They Actually Eat That:" Hamburgers.


Summer's here, and that means that a lot of us in the States are hosting barbeques. Barbeques usually consist of meat, meat, and more meat grilled over charcoal for a smoky flavor.  Hamburgers and hot dogs are popular fare. I've already implied how disgusting hot dogs are several times. Burgers, well... 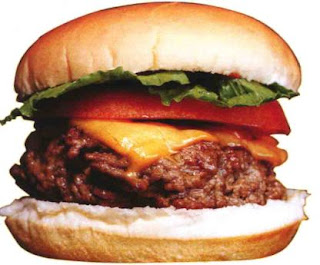 Burgers embody everything bad about American cuisine: grease, meat (in this case, beef), and drive-thrus. Be especially wary of the ones from fast-food chains; they have somewhere around a thousand calories each (OK, more like 500) and are usually dirt cheap. What could possibly go wrong?

For starters, the beef industry in general has had real problems since Day 1. I mean it - since cows were first domesticated, they were farting methane into the atmosphere. We then began farming those cows into masses of meat, milk, and other potentially delicious things beginning with the letter "m." This has lead to global warming for two reasons: one, people cut down natural forests to make room for cattle grazing; two, methane from livestock degrades the atmosphere in more ways than one. Even without factory farming, it is really hard to farm cattle sustainably.

Things only got worse when the Industrial Revolution took place, which allowed cows to be shipped and slaughtered en masse. Old-timey slaughterhouses were messy, smelly places that were exposed handily in Upton Sinclair's The Jungle. Even today, the process is messy. It's cleaner only because it's done by machines. I'd link something, but then I'd have to hope nobody was eating at the moment.

Aside from hot dogs and other various sausages, hamburger meat is the most well-known mystery meat. Nobody knows where the meat in your burger has been. Unless we grind our own beef, most of us never see the conditions that the meat was in before it was ground up. For all we know, it might have come into contact with stuff from another cow's intestine - thus E.coli and a bunch of other bugs that should be nowhere else except one's intestine get into our food. The sanitation of hamburger meat is so frequently questioned that the FDA has an official Q&A page for hamburgers/ground beef. It has its own page. That's a bad enough sign.

This process does, of course, open the meat to all sorts of contamination. To say nothing of the grisly conditions of Mickey D's slaughterhouses, the mere process of grinding beef exposes more of the meat to bacteria (as per the FDA's own Q&A listing for hamburgers/ground beef). Some of these can be killed by temperatures of 160 degrees Fahrenheit, but ground beef also has a short shelf life. Be careful, man.

Now for the real question: Do you want fries with that?
Posted by KuroKarasu at 11:00 PM