Who's That Pokemon - Unova Edition: Carracosta.

Gen V was not blessed with good fossil Pokemon. One of them, Archen/Archeops, is an Archeopteryx with a terrible ability that halves some of its stats when low on health. Tirtouga/Carracosta, the other fossil, is close to being a good wall and learns Shell Smash, the best stat booster in the game. It is never ever leaving the NU tier simply because, like all turtles, it is very slow. 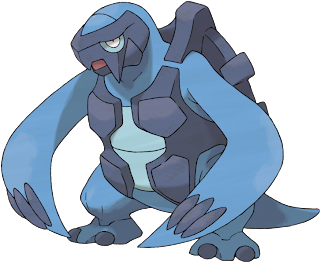 But it's just a sea turtle, you say? Not that sea turtles aren't amazing creatures, but this turtle's a fossil. That means it's based off of an extinct turtle.  If we want to get really technical, Tirtouga is based off of the ancient Protostega gigas while Carracosta's got more aspects of Archelon ischryos - the largest turtle that ever lived. Archelon was more impressive, so let's hope Protostega fans don't get offended. 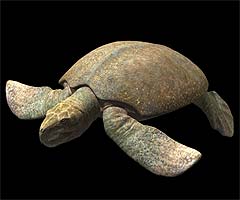 Archelon (only one species known) was a huge sea turtle that lived during the Late Cretaceous Period, the time when T-Rex and Triceratops were having epic battles on land and Pteranodon roamed the skies. There is a wide range of things it could have eaten depending on jaw strength - speculation ranges from squid to jellyfish to potentially being an omnivore.  The closest living relatives of Archelon are modern leatherback sea turtles. Most of them have been found in Wyoming and South Dakota.

Archelon was one huge turtle. The largest of them measures 13 feet (4 meters) from head to tail and 16 feet (almost 5 meters) from flipper to flipper. It weighed somewhere around 4,900 pounds (2,200 kg) when alive. Flash back to our turtle soup entry - that's a lot of soup.

Aside from sheer size, Archelon has one more distinctive trait: its shell is, in a way, incomplete. Modern turtles have their backbones fused into their shells, which are also bony - seriously, that whole shell has bone under it. It's like they have an exoskeleton. The Archelon had either leather or detatched bone covering its shell. Someone, somewhere, has probably tracked turtle evolution; it must be fascinating to see a netlike shell like Archelon's become solid over time.

Nobody knows how long individual Archelon lived. Supposedly, there was one that lived around a hundred years.  They may have either slept on the seabeds of North America or brumated depending on the weather. They all went extinct with the dinosaurs regardless. For now, we must make due with digital Archelon and sea turtles. Now if only I could get an Adamant one with awesome IV's... *Crosses fingers.*
Posted by KuroKarasu at 11:05 PM