"They Actually Eat That:" Lizards.

So, after my workout today, I caught a commercial for Geico car insurance. I love that little gecko. He has yet to sucker me into buying car insurance, but I still love him. Call me crazy, but I find lizards cute, especially when they're telling me how to save money. 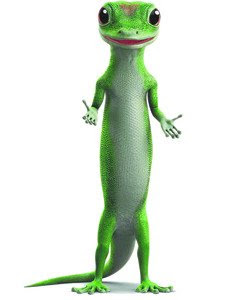 Suddenly, I wondered: Would people in the modern day have the heart to eat such a creature? I could understand, say, China eating lizards (everything's on the menu there), but what about places that don't have such a knack for weird food? 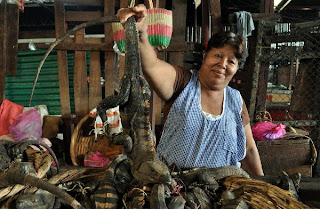 Surprise, surprise. Lizard is actually a pretty popular food animal around the world. This is particularly so in places like Nicaragua, where eating lizards is so much a part of the culture that several species are threatened with extinction in the name of cuisine. They are believed to help people recover from illnesses. Oh, folk medicine, the species that will be lost because of you.

It turns out that Spain, of all places, has a thing for lizard cuisine. They make a dish with the ocellated lizard in Extremadura, Spain. It's called lagarto con tomate - lizard with tomatoes. It involves slicing up the lizards, frying them in olive oil, and then stewing them with tomatoes and onions. I hate to admit it, but this one actually sounds really good!

Let's not leave China out of this. I mean, really, it's not like we didn't see China coming, but they do eat lizards. Lizards, after all, are alive and plentiful in China. That's enough to put them on the menu. Granted, we in America are probably the weird ones for not eating lizards.

Sorry, but they sell us car insurance. Cutely.
Posted by KuroKarasu at 11:46 PM