Birds are, without a doubt, nature's original artists. Although some of them may be rather morbid, they had colors before we did (and make better use of them), created music as we know it, and, we aren't even kidding, have complex enough songs that many songbirds have dialects - i.e. even though they're the same species, the songs are so dissimilar that two birds from different areas can't understand each other. Even today, what artist of any discipline has not felt the urge to fly into the great blue on wings or in song? Hell, even the great Beethoven kept a mynah bird. 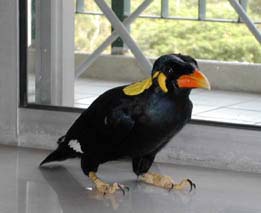 The common hill myna (Gracula religiosa), or mynah, is one of the most famous talking birds in existence. It is native to South and Southeast Asia, ranging from India to Indonesia, and is most closely related to starlings. There are eight or so subtle subspecies which are mostly differentiated by the wattles on their necks. They eat fruit, nectar, and insects in the wild. There are several other species of mynah, but this is the one that most people are referring to.

Mynahs are among the several birds known for being excellent mimics. In their natural range, they can have anywhere from 3-13 calls per bird. The calls completely change within miles of each other. It's things like this that make us wonder if birds had language before people did, along with nearly every other art form.

So, just how well can mynahs talk? They're amazing. Parrots have a sort of 'parrot dialect' whenever they speak; mynahs have no such thing. If we didn't know that the clip below was a bird, we might've very well mistaken it for a monotonous screenplay:

Mynahs are listed as 'least concern' according to CITES, but populations have been declining in recent years. The only place in SE Asia in which the mynah is not plentiful is Bangladesh, due to both habitat destruction and over-hunting for the pet trade. They are so easy to breed otherwise that they have established feral populations in Hawaii, Puerto Rico, and Australia (with disastrous results). If you do want a myna bird, I'm sure there are people breeding them in captivity in the States, and several farmers in India have learned the right time to take the young out of the nest in the wild. Who knows? Get a mynah bird and you might write the next great symphony.
Posted by KuroKarasu at 11:59 PM