"They Actually Eat That:" Cat Food.

Maybe I was a little harsh on dog owners. After all, I've seen clothes for cats, too. It's not like cat owners don't have some deep, dark secrets as well.... 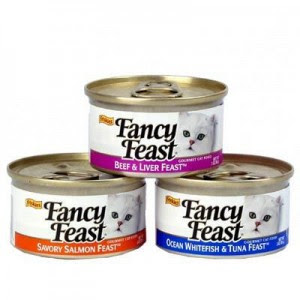 Cat food is one of the less pleasant parts of having a cat. Regardless of whether one is a carnivore or not, it stinks. It is just barely food, containing various, miscellaneous animal bits with only dashes of whatever flavor is one the can. There are several tiers of quality in cat food, but unless you cook a gourmet dinner for your cat every night, chances are that canned food is mystery meat. It's like a hot dog without the wrapping - you don't know where most of the stuff in your cat's food came from.

Oh, and cat food is taste-tested by people. Yeeep.

Wait a minute. Let's go look at a cat food can label. Hmm...yep. "Not suitable for human consumption," right on the can. Isn't that also kinda backwards? I mean, humans aren't going to be eating this food. What's going on, here?

Cats have extremely sensitive palettes. It's not possible to ask a cat's opinion on how something tastes, so we have humans test them, instead. Cat food companies have tried testing their formulae with cats. It's just really hard to record data from an animal that thinks it's better than you. We also know we're the cats' pitiful slaves already, so it is our implicit duty to taste their food like a servant would for a king in the old days.

We may not know exactly what a cat is tasting, but we can guess. We know, for example, that cats cannot taste sweet, so the tasters will not be looking for that particular sense. Pet food connoisseurs have been given a few criteria -such as "burnt," "rancid," "bitter," and "prawny" - used exclusively to describe the taste of cat food. Interestingly, the "burnt" and "rancid" cans supposedly taste best to human palettes. Bear in mind that these taste testers have no idea where that meat is coming from.

Some people who are hopefully paid for this job actually wind up liking cat food. Some people who do this job even develop favorite flavors. That said, I would still not advise trying it at home.
Posted by KuroKarasu at 11:07 PM