At Brookfield Zoo, there used to be a cage of free-flight fruit bats. Ah, memories, sure, people got urinated on, but it was an amazing experience. Still, we never got good shots like in this video. My admiration of that camera work and that bat knows no bounds.

Bart up there is an Egyptian fruit bat (Rousettus aegyptiacus). It has a very wide range, spanning from Africa to Pakistan and India. As the name would imply, it eats fruit - insect-damaged fruit at that. This is pretty average as far as fruit bats go. In fact, it's small by fruit bat standards. That just makes it, well...adorable. 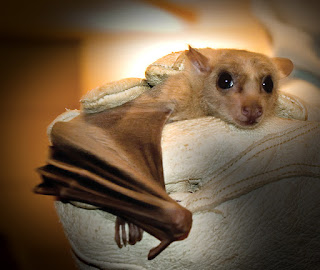 Egyptian fruit bats are among the very few megabats to use echolocation. Bats 101: echolocation is a means of using sound like sight. The best way I have seen it described would be like a blindfolded human bouncing a tennis ball against a wall to "see" exactly how far away said wall is; it is a difficult thing for humans to imagine. We utilize a similar method in the form of sonar. It looks like these bats can probably see and smell fairly well, too. They also communicate vocally amongst themselves, meaning that a roosting colony can get very chatty indeed.

Anyone who loves bats can tell you how ecologically-important they are. For fruit bats, that significance is on par with hummingbirds and bees: they're pollinators and seed dispersers. In the case of Egyptian fruit bats, they help keep the baobab population up. The trees are more endangered than the actual bats. They still do not deserve to be poisoned on sight; we just happen to have coinciding tastes in food.

Egyptian fruit bats can be found in the exotic pet trade and are considered one of the easier bats to keep. They breed readily in captivity, but you need at least ten to constitute a colony, as well as space enough for a walk-in cage. They are not recommended for your average person. There is absolutely no need to buy an import if you really want one; in fact, wild fruit bats may carry a disease similar to Ebola, so best avoid imports entirely.  Better still, however, buy a bat house for your backyard. Enjoy some wild bats before attempting to keep them.
Posted by KuroKarasu at 11:41 PM